This feels wrong, doing these bi-weekly updates. It was necessary but it still hurts. Look how they massacred my boy. I blame Bean.

Anyways, welcome to the post-E3 Installation 01 update. Now that we got a glimpse of the new Mark VI Gen3 armor in Halo Infinite, you get to take a glimpse at some text on a page. Let's pretend they're basically the same thing. I'm here to give you information about an upcoming, non-vaporware video game. That game's name? Installation 01.

"Concept art is the backbone upon which society is built." - Somebody, at some point, probably.

Space is of course, the final frontier. What they neglected to mention is that frontier is very very big. So big in fact, that we can have Aviixe continuously draw pretty pictures of space for the rest of his life and still not even scratch the surface of all that this frontier has to offer. But that won't stop us.

If you haven't already guessed, we've decided to pull a Halo Reach and use some parallax concept art as the background for Installation 01's menus. There will be a variety of different pieces for each "area" of the UI. That means a new masterpiece to smash your eyeballs against every time you navigate to a new menu. This particular artwork was forged through the fire and the flames (played on Expert) to add some more flair to the background of our server browser. 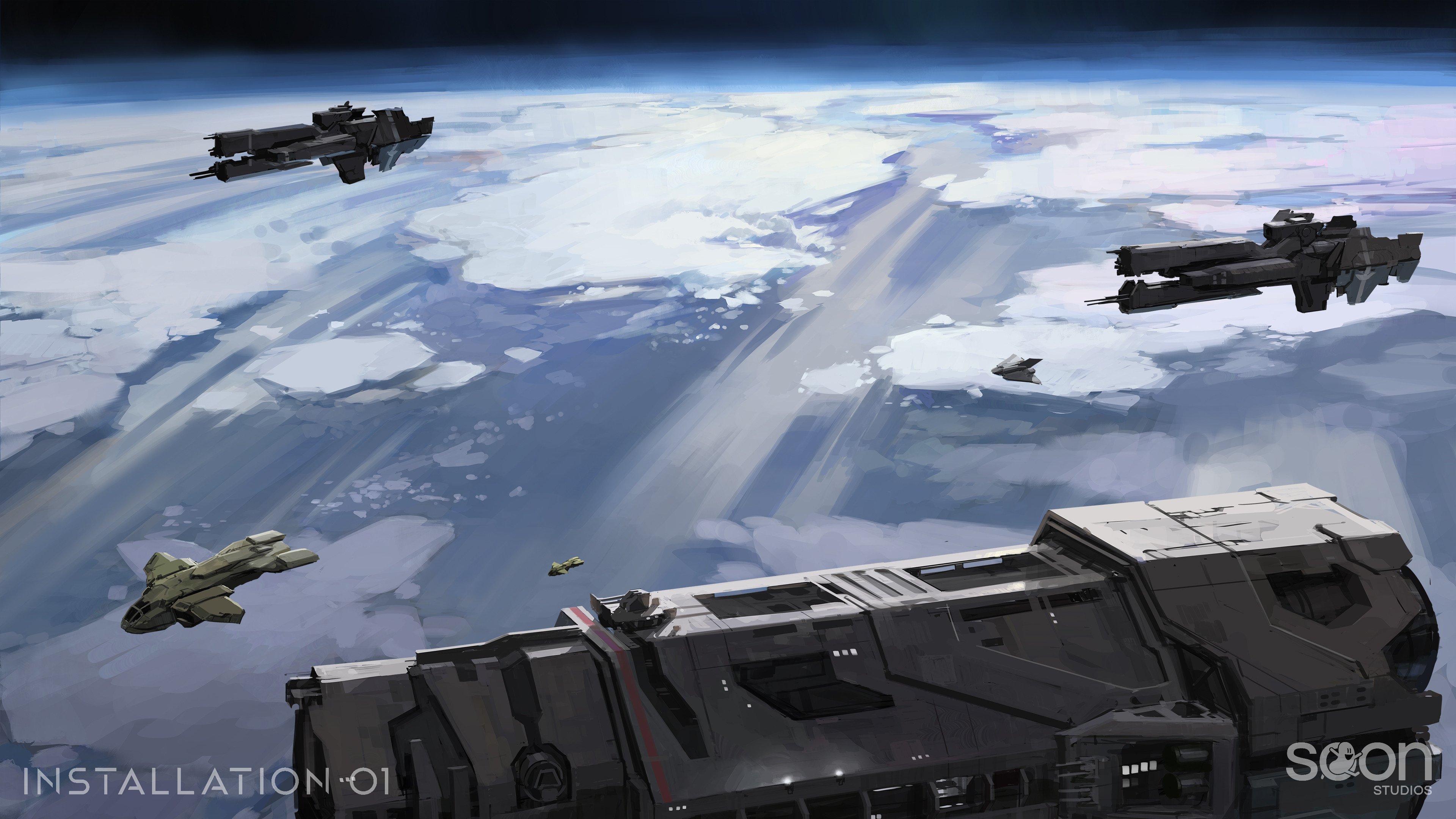 If you're curious as to how such a treasure is created, I'll explain. First things first, you start by creating a concept art for your concept art. It may not be exactly like what the final scene comes to be, but it is a good place to jump off from. Add some black blobs that vaguely look like drop pods and some streaks across the entire image to really make it look artsy. After that, all you have to do is draw the rest of the art. It really is that easy. Literally anyone can do it. The art industry doesn't want you to know this, but taking years of practice and art education is completely unncessary. Big art just wants you to think it is. Now that you know the two-step plan to achieving greatness like Aviixe, you too can join the Installation 01 Team.

Jeremy Quinn? Get outta here. Ikki Day? Who even is that? Regular plebs join the Installation 01 Team all the time (although not as much as we would like please apply). This time is different. It's motherflipping Orion. The most beautifulest, handsomest, and most cuddly-est man to ever bless the world of Halo. 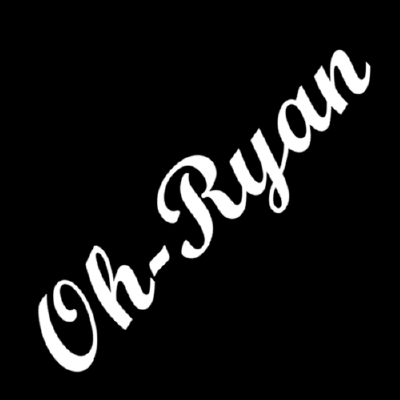 If you don't know who Orion is-- let me enlighten you. I've known him for 4 years now. Orion and I co-developed an alternate menu for ElDewrito from May 2015 until the end of 2016. Among other things, we also accidentally named the songs on the Halo Online soundtrack, developed a fully functioning matchmaking system, and created one of the first interfaces for Cemu, the WiiU emulator. If you'd like to see some of the things we've done together in the past, you can find those over at the aptly named https://github.com/TheOrionTrain or on Orion's YouTube channel.

Anyways, working on the menu for ElDewrito with Orion is what put me on Bean's radar and eventually lead to him bringing me onto Installation 01. So in my mind Orion is the reason that I'm here in the first place. Without him reaching out to me back in 2015 my life would probably be drastically different.

Now I'm dragging him back to the world of Halo to do more of what he does best, programming. He's actually been playing around with Unity for some time now, so I don't know why we didn't bring him on sooner. He also does a fair bit of backend web development as well which could, just maybe, possibly, help make matchmaking a reality in the future. But don't quote me on that. Hopefully now you understand why I am so excited about Orion's arrival. Be sure to say hi if you see him around.

Sketches in a Book

Except the sketches aren't drawings and the book is YouTube video.

Jafet "The Mexican Marty O'Donnell" Meza has put out even more music. Or rather, some early versions of some of our tracks. This sketchbook should give you a good idea of what goes into the making of a game soundtrack. The songs go through multiple revisions before they reach completetion. Plenty of them get scrapped or changed almost entirely along the way.

Remember to follow Jafet on his YouTube channel to catch the latest music straight from the source. You wouldn't want to miss the super secret, totally real huge thing that's coming soon. It's definitely a very legit and non-fabricated thing that you absolutely need to see. I am not just making things up to boost Jafet's subscriber numbers. It's coming soon. It's almost here. And the only way to see it is if you smash that like button, comment, and then subscribe. And then also click the bell icon for good measure.

Every update, you see this button. You think about clicking it. You think about the experiences to be had. All of the things you could learn. And yet, here we are-- at at the same impass. It would be so easy to click and then fill out a form. But you don't. You just look at it. The pink and orange gradient that will lead you to greatness. Why is it so hard to click it? Why must there be this mental barrier?

Today is the day. It's inbetween yesterday and tomorrow. It's right now. Your cursor is hovering it. It's changed from the usual triangle-thingy to a hand with a finger pointing. The time has come. The Installation 01 team awaits your arrival. We are here to embrace you with open arms. Do not fear rejection. Greg is the light of our lives. When you need warmth, just turn RTX on and the godrays from his glorious melon will illuminate you. Bask in it's heavenly glow and you will achieve inner peace. Just do not stare directly into it, as our mere mortal eyes cannot take the excessive ultraviolet radition and will subsequently melt. Sunglasses are recommended.

That is all we have for you this week. What do you guys think of the new Halo Infinite trailer? Personally I was disappointed, I thought they would be showing some gameplay. I guess now I know how you feel every time one of these updates comes from us and has no gameplay in it.

14
AncientEvolved
Add anything to gameplay..... or just art
5
TheOrangeOfDoom
Love the updates. Wish I had the skills and time to help out the project!! I want i01 in my life so bad. Keep up the work guys, we believe in you!
5
Insan1ty_One
Yeah, I've been following this project for a long time and honestly videos of assets or even small snippets of gameplay showing off new development progress would take these bi-weekly updates from "boring" to "wow, this is really interesting!" Hopefully we will see an early access release of i01 before Halo Infinite in late 2020.
8
Anent_
This might be a stupid question but why can’t you guys just release the game in a sort of early access and continuously update it? Seems like there’s enough content to at least have a demo to tide people over.
17
Choo Choothefeeltrain
That is actually the plan, just not right now. Even though it *seems* like there's enough content, it's not in a state where we can show it. Or else we would be showing it lol. It makes sense when you think about it.
4
Anent_
Ah okay then. You’ve done an astounding job so far, even your armor sets look higher quality than what we’ve seen in the Halo infinite trailer. With that in mind I can’t really complain haha.
1
L3fty777
People are losing interest dev team...Including me. Add something new instead of a bunch of boring stuff, eh? A video of how development is going, perhaps?
7
Choo Choothefeeltrain
Ah yes let me just add something new, we weren't already doing that but now that you suggested it we'll try that. This whole time we were only adding something old. Oops. We'll also just make a 10 hour long video of Dave writing C# for the networking stack so you can see development because that is very interesting content. The reality is that game development is already a long and expensive process when people are working full time and being paid six figure salaries. Especially Halo, which is backed by the largest company in the world. We're a bunch of volunteers working for free whenever we have the time to do so on a budget of $0. If a AAA game takes 2-3 years to make it's perfectly reasonable for us to take 3x or 4x as long.
1
L3fty777
Can't control hype. Should have held back on the announcement?
3
Choo Choothefeeltrain
We need be public so we can find more volunteers. If nobody knows we exist it's much harder to find anyone willing to work for free.