Ah, it feels good to be back on the normal schedule again and just in time for those April showers. Everything is the way it should be now, you guys get to see some cool models and such, I get to rant about whatever for a few minutes, and most importantly Bean is still continually getting blamed. Perfectly balanced, as all things should be.

This week we’re going back to the more traditional format and showcasing our Needle Rifle which has been in the works for quite some time. I also happened to bring along Samuel and Greg who worked on the model to give a more in depth look at it. So let's get started...

As I mentioned earlier I brought some of the people from The i01 Team who have actually worked on the Needle Rifle to give us some insight into how they ended up with the finished process. So instead of me blabbering on about it, I’ll just let Samuel take the wheel for now. 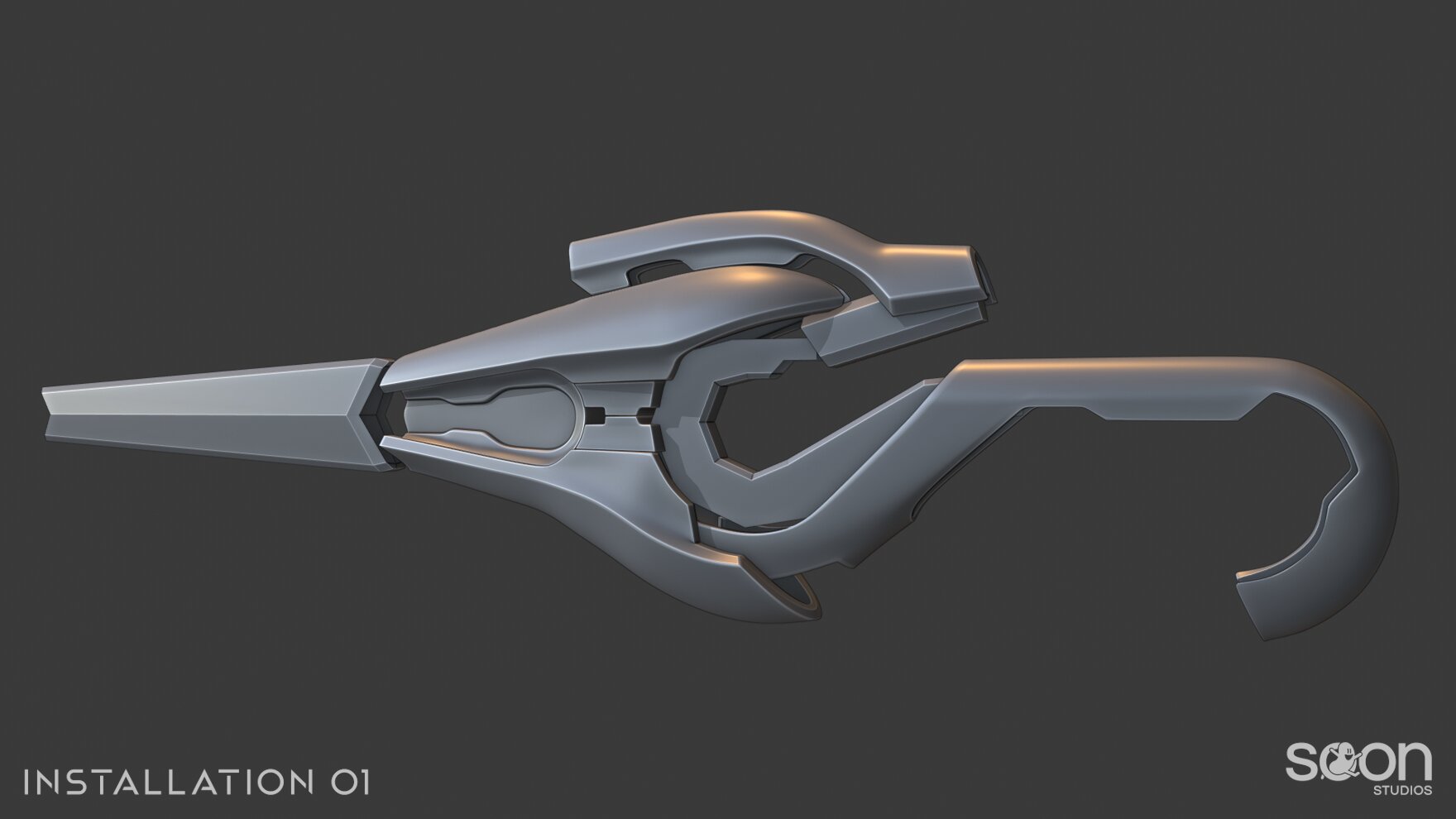 Samuel: Like most projects, it's important to start big but basic. Our plan going in was to adjust the concept as we attempted to sloth the rifle to its new role, so I tried to keep it in what was just it’s basic outline shape for as long as possible. Early on, we set up a first person camera for easy reference. This turned out to be paramount for a vast majority of the design, as many of the shapes and forms were built specifically from this view to create visual interest, and improve readability. 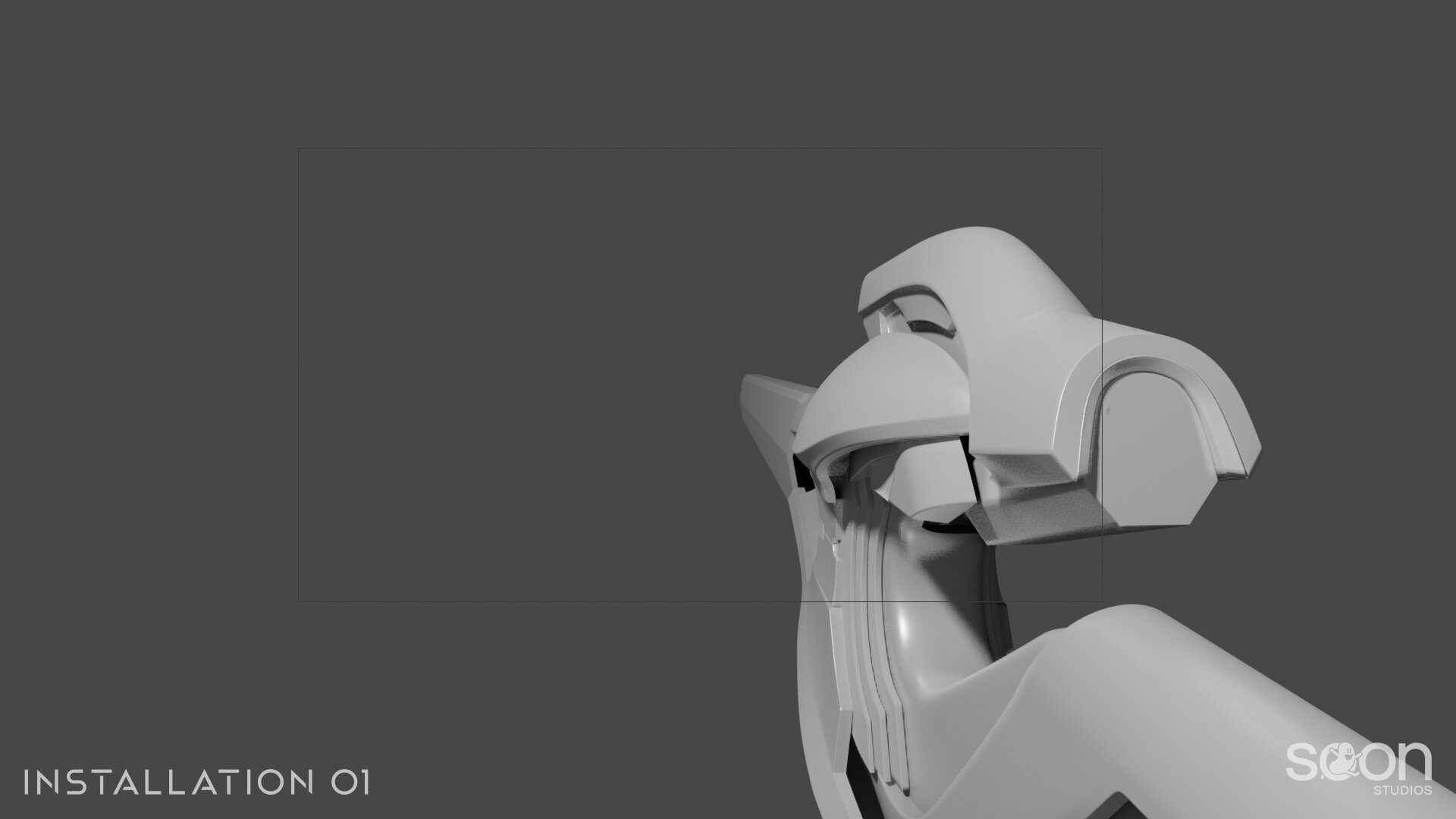 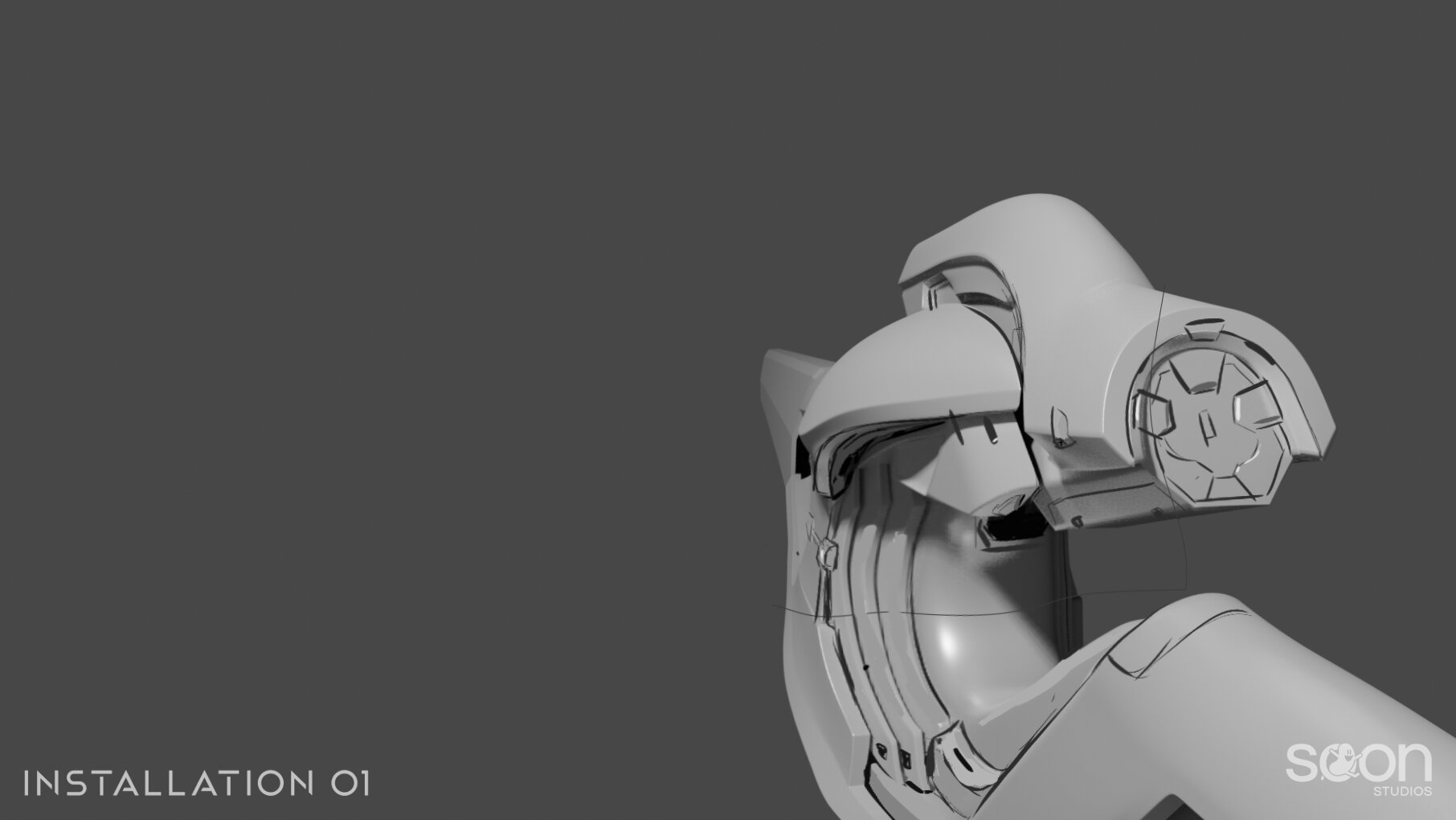 Samuel: This camera also allowed me to quickly and easily adjust proportions by loosely painting over screenshots, and made heavy use of rough liquifying in order to figure out the proportions as much as possible. So far, the rough highpoly is just the general subdivision surface workflow, making use of creases for fast iteration without having to worry too much about topological flow. Through feedback from one of our concept artists Ikki, and our art director Pat-a-wan, we also further adjusted proportions by pushing out and completely redesigning the stock to help ‘beef’ up the weapons side profile. 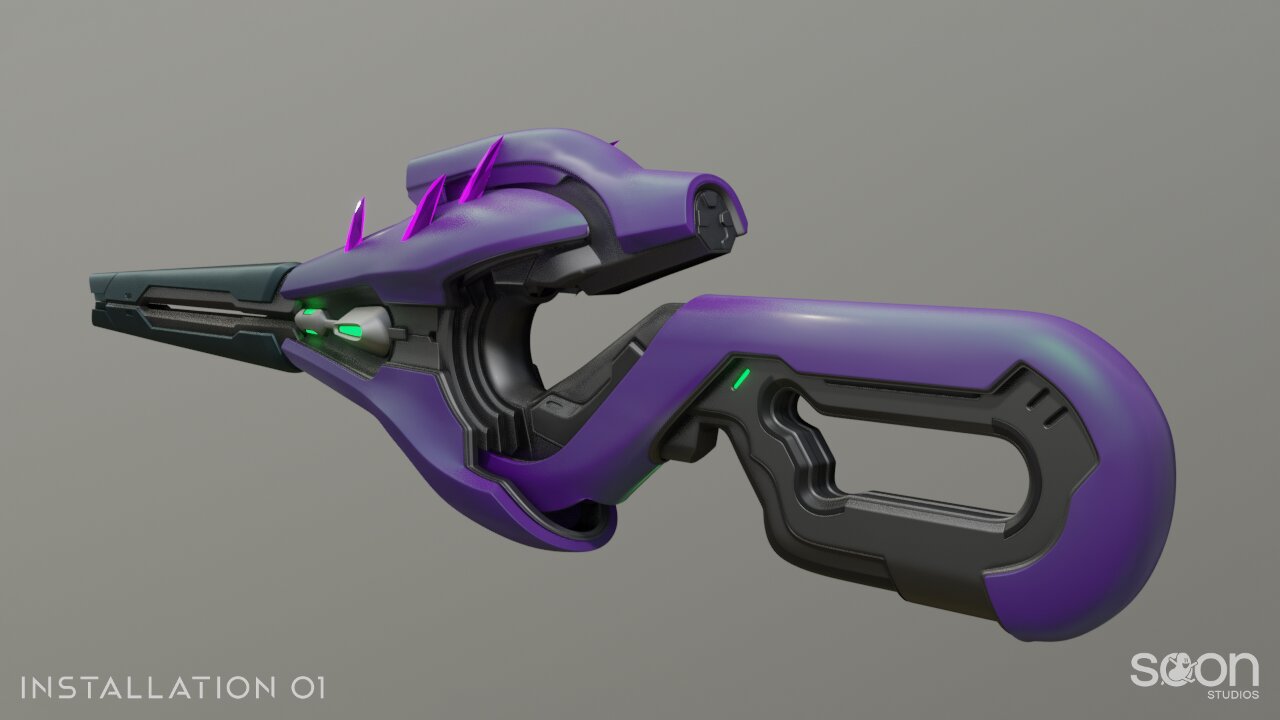 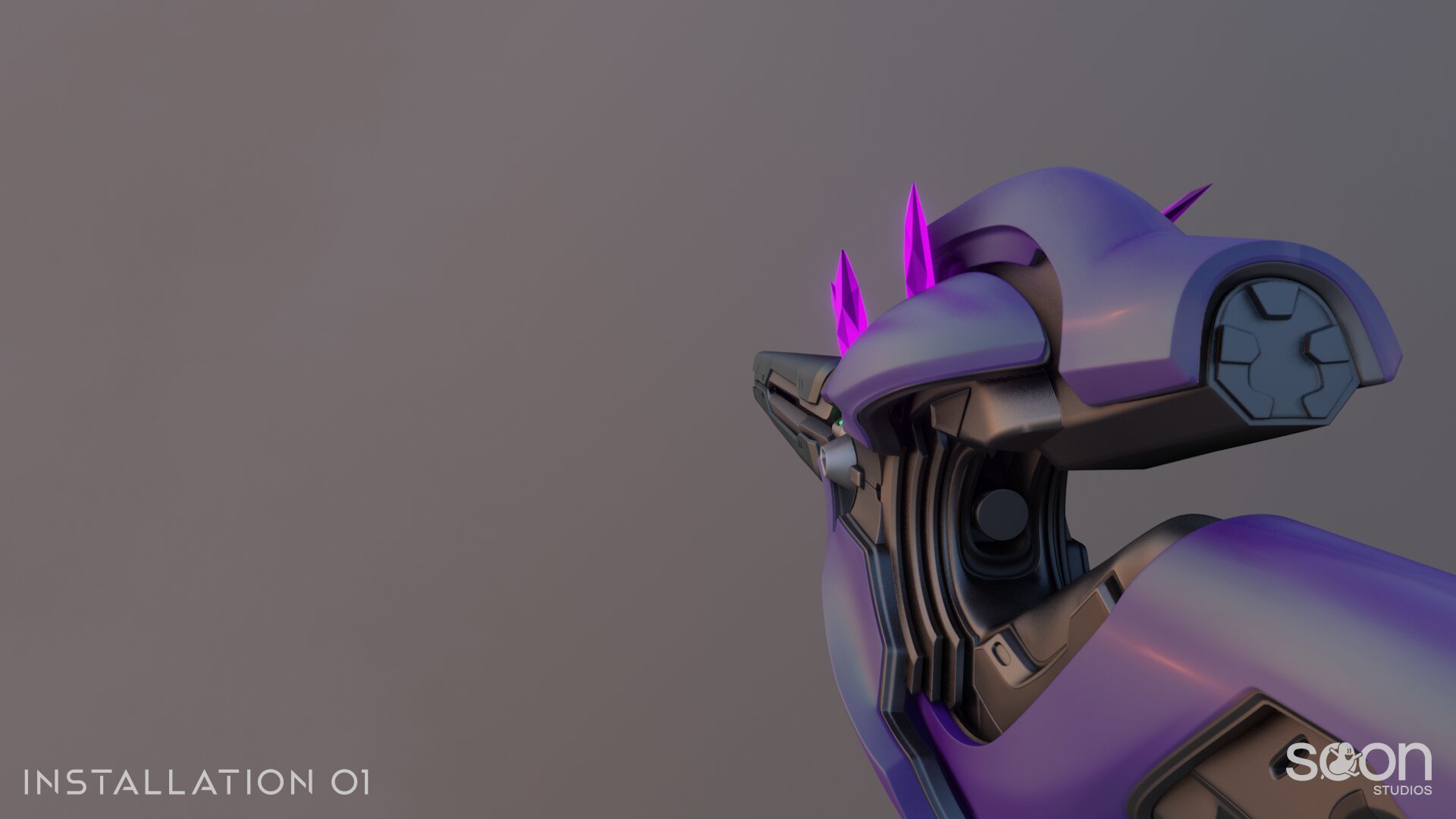 Samuel: Now the interior is where the fun begins. I was never a fan of the lack of interior for the original needle rifle, so I took the time to build an interior that could maintain the looks of a functional alien weapon while also referencing the Halo 4 and 5 approach to covenant pipework. 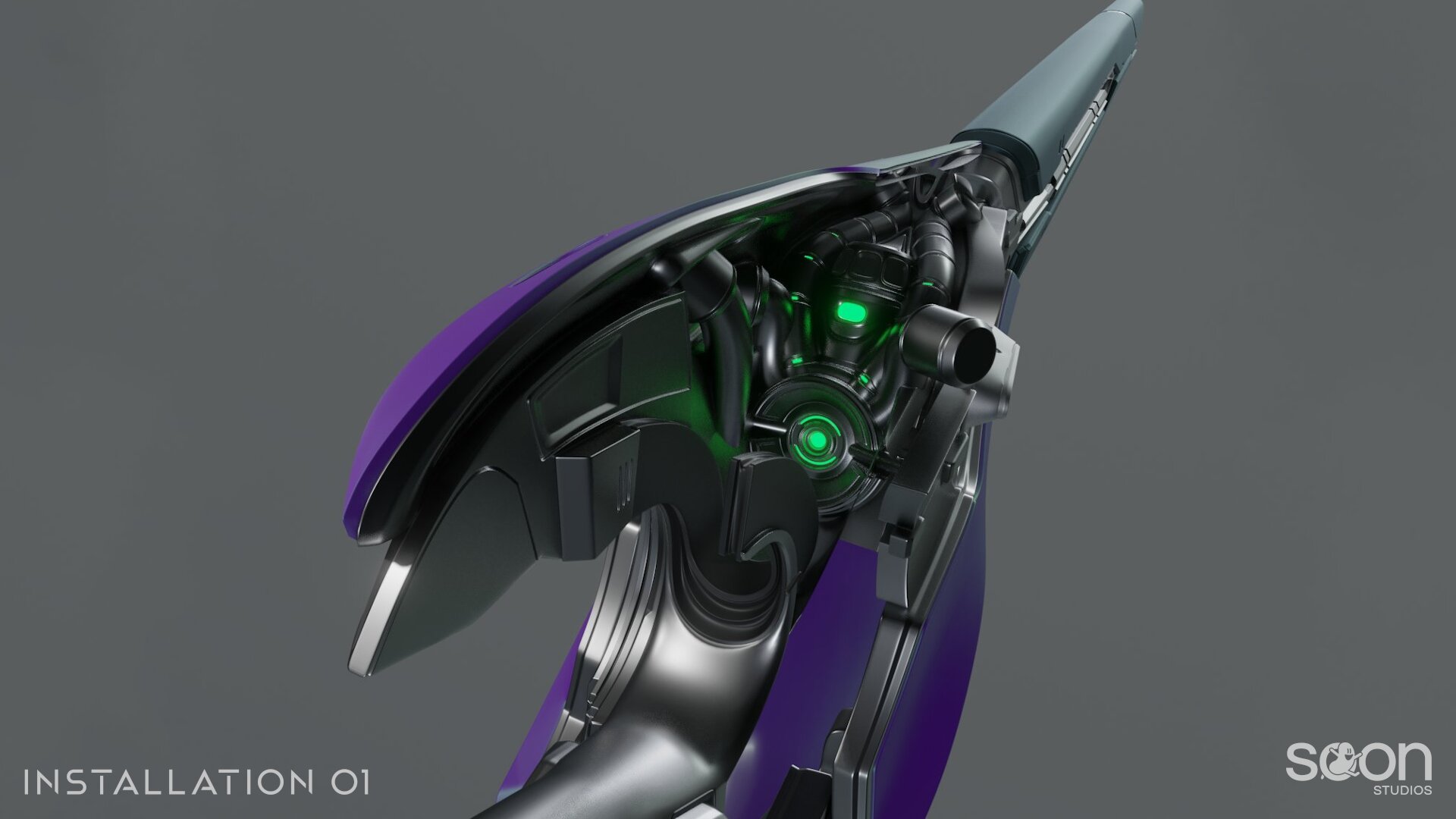 Samuel: However, this also caused me to trap myself in a bit of a pickle. Due to the additional bulk, the reload for the classic needle rifle wouldn’t fit, as the flipper would clip significantly into both the interior and the main carapace. Because of this, I broke away from the original model a bit, pushed the pivot significantly higher and further forwards and adjusted the cell cradle accordingly.

Samuel: After this it was all just general hard surface refinement. A lil greeble here, a cheeky bevel there and we’re done for the HP. Most of the detail was pushed towards the area directly in front of the camera. The flipper, fins, projector and cradle. 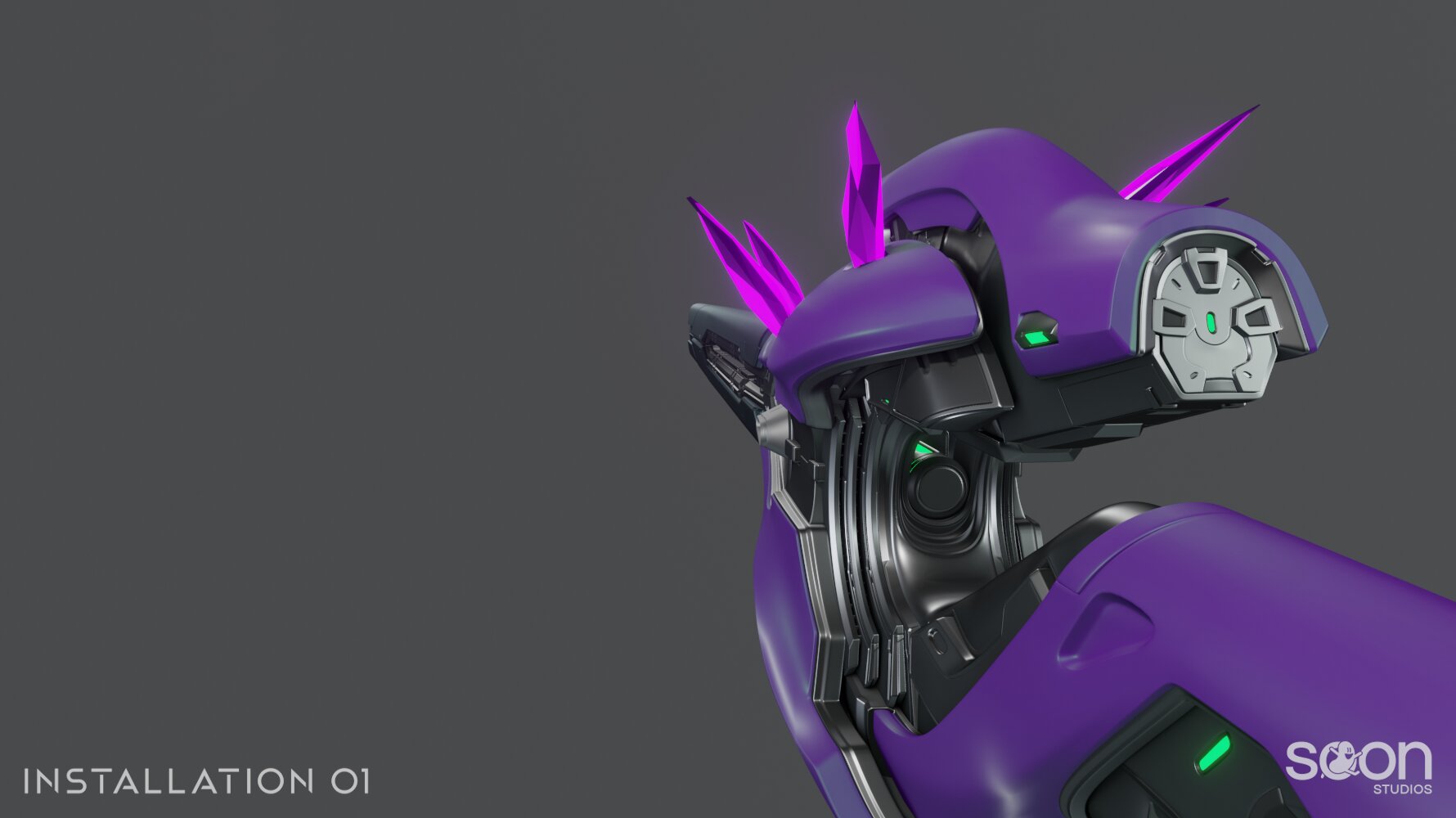 Samuel: Now we move onto the textures. Greg was the main lead for the covenant materials, so I’ll let him take over.

Greg: For all the other assets up till this point, we’ve been using a physically based shading workflow under a Metal/ Roughness paradigm. What this means is that there would be a color map that defines the surface color, and a greyscale map that would define what parts of that surface is metal or dielectric. If you wanna know more, look it up. Be the change you want in the world. With the covenant assets, we wanted to do something different; which would be to decouple the specular colors from the diffuse. In order to do this, we had to use a PBR workflow built on a specular/glossiness paradigm. I don’t actually know why there’s a split in use between glossiness and roughness. They’re literally the same black and white data, just inverted from one another. I find it silly, but whatever. The meat of the idea here though is that a specular texture is a full RGB texture that is wholly different from the base color. This means the base diffuse color can be a purplish blue, and the specular color can be a hue of green. This is pretty much a free iridescent effect.

In terms of the art design philosophy, the inspiration of the covenant “shell” is a polished geode metal hybrid; something that does not exist in our world. As much as I personally love Reach, I thought the “paint over metal” look was unbecoming of a technologically overdeveloped but sociologically underdeveloped faction. It had none of the pomp or circumstance one would expect from a gang of high tech godwarriors. The idea here is that the covenant gear doesn’t look corporate, but ceremonial and ancient within reason. All the guns they’re carrying are as old as--well in the Halo timeline they’re probably being forged as I type this. I wonder if this blog post is what kicks it all off…

Back to you, Samuel Hayden.

Samuel: Thanks Greg. With his infinite guidance and wisdom, both him and I developed our own Covenant materials based on this general idea as a Substance Painter Smart Material. This was heavily tested and iterated within both Unity and Substance until we reached the style we were after. 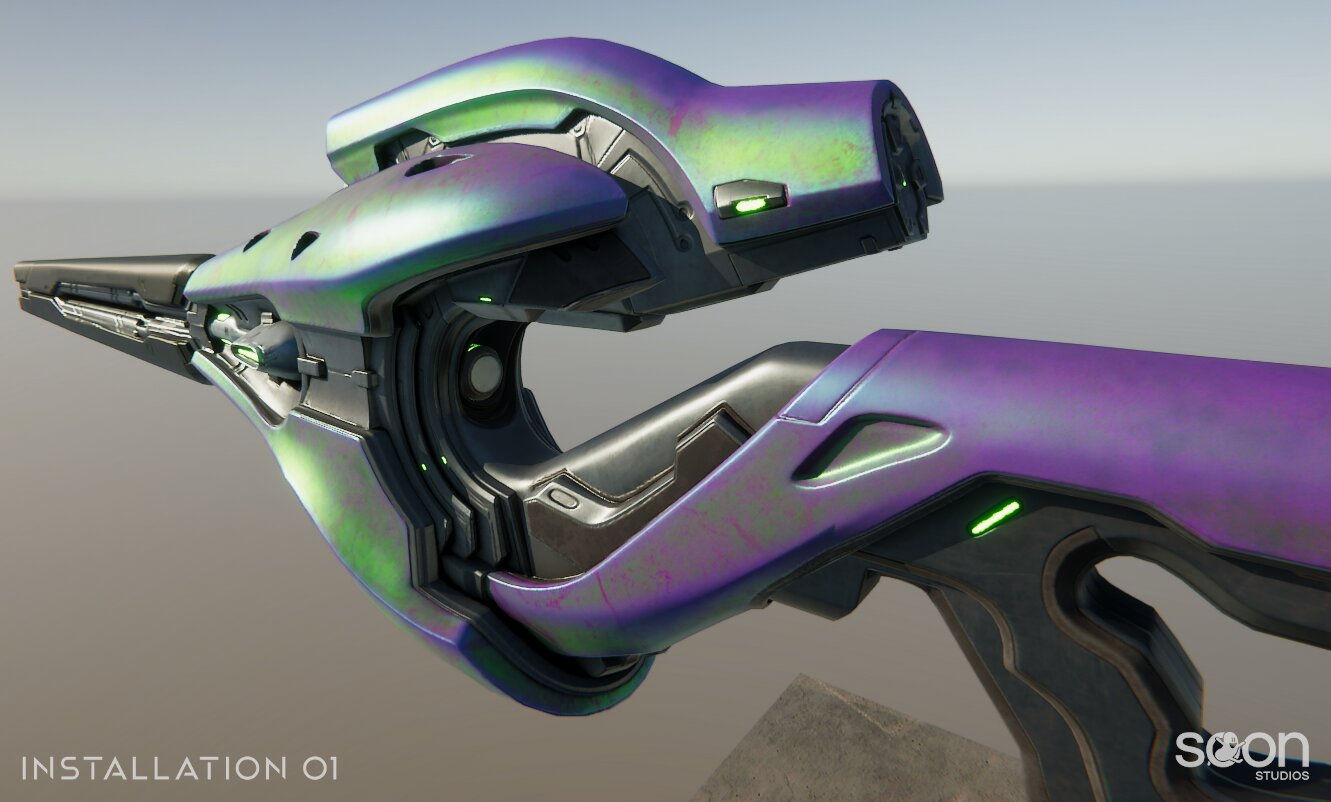 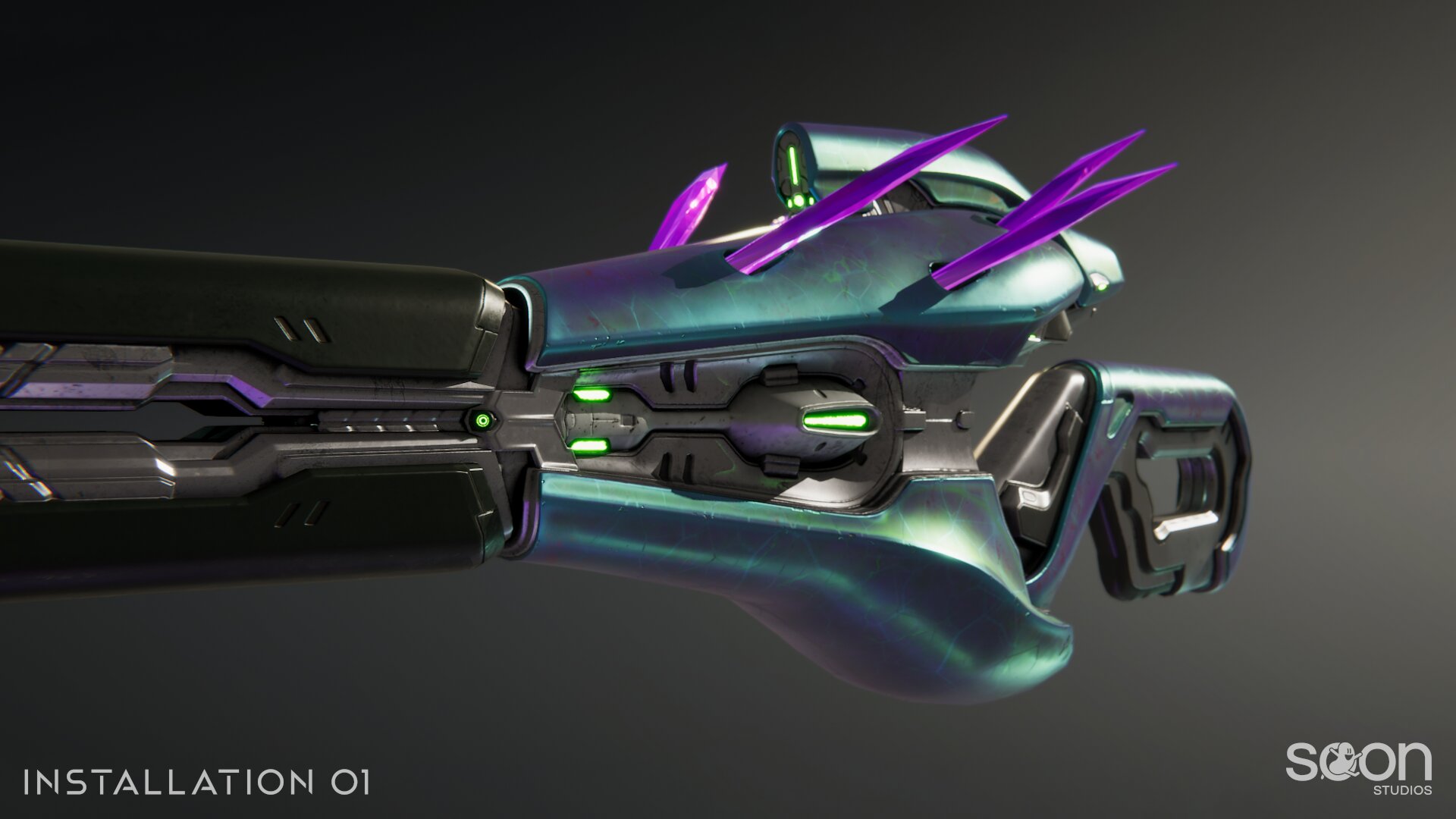 Samuel: The first picture was the initial test with the first specular pass, and below you can see the final specular. This material was edited numerous times significantly until we all felt it represented what we now have as our established idea for the Covenant Materials. 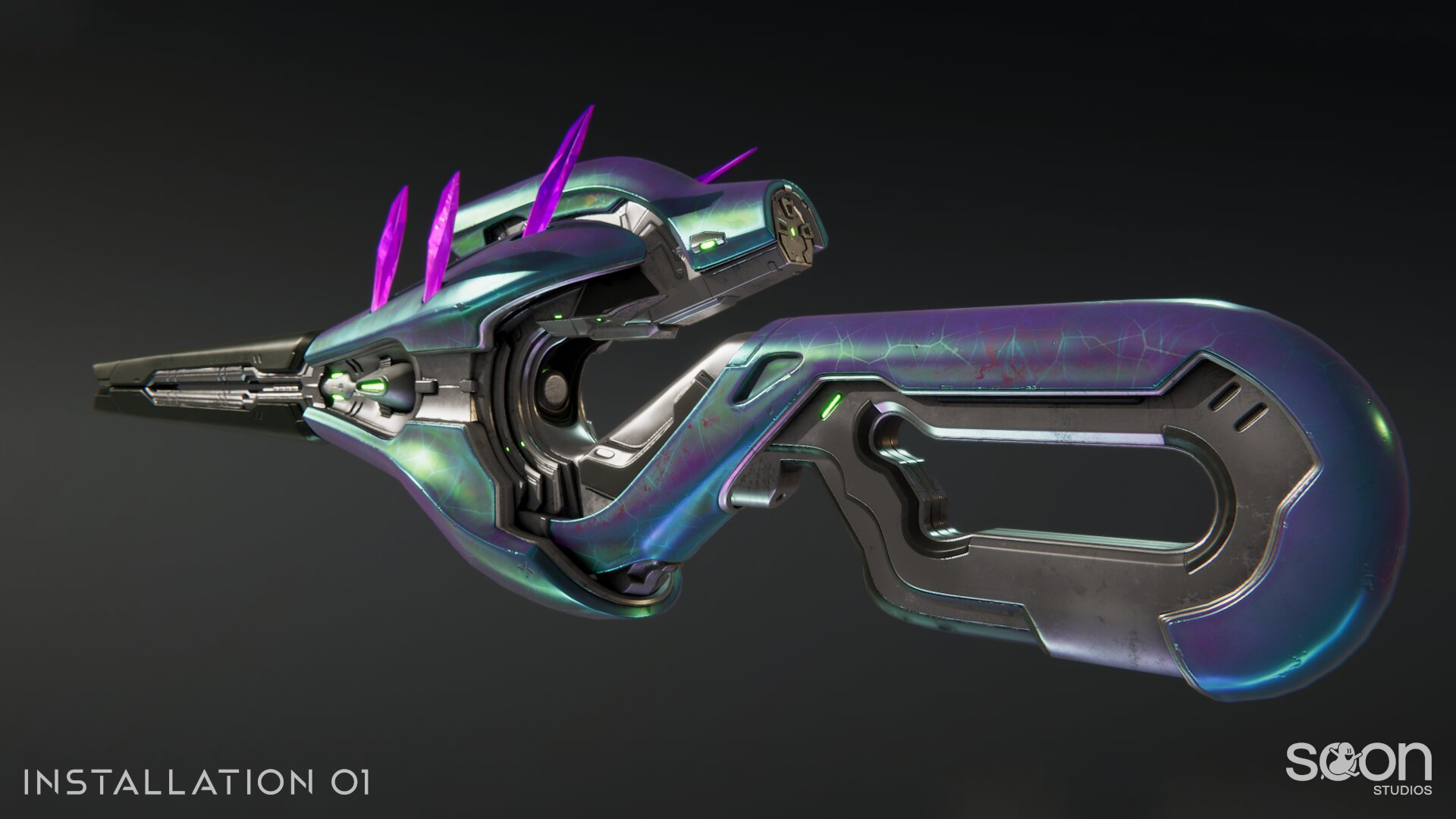 Samuel: Here you can see the model with diffuse lighting disabled in order to show the specular unimpeded.

And that, kids, is how a model is made. I hope you learned something from all of that juicy information they spilled, if you didn’t, oh well. I’m not too worried, I just hope you think our Needle Rifle looks cool after all the work that was put into it.

You know how the saying goes, sharing is caring. I know you have those hidden game dev talents you’re refusing to share with us, so to my understanding that must mean you don’t care. Well now, that just won’t do at all. If you want to show us you really care, just apply to join the team, I promise it’s really not that bad. 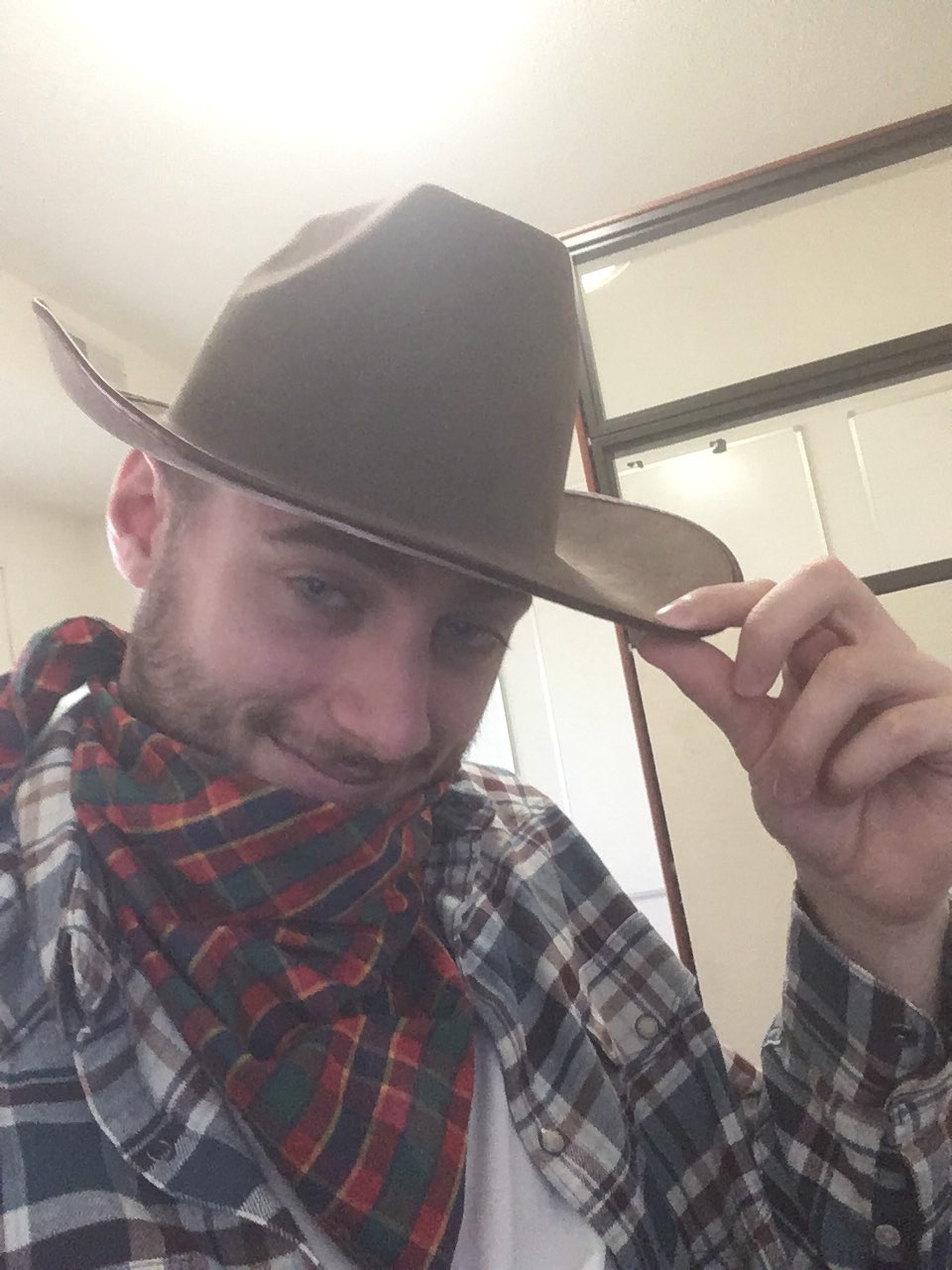 The outlaw known as "TheChunkierBean" is still at large. He's wanted for many crimes across these lands, including: failure to pay his development team, inability to release "Installation 01", and harassing civilians in a giant bean costume. He is considered not armed and not very dangerous. You will be paid a hefty sum of $7.77 for the aid in his capture, either dead or alive.

This is where we must part ways for now, but I’m sure we will find a way we can be together again in the future. I’m not going to go throw some pebbles at your window in the middle of the night though, that would just be creepy. I mean, just come back in 2 weeks and i’ll be here again... probably.

17
Waffles_Of_AEruj
Hoooooo my LORD that rifle looks good, stellar work as always
8
[deleted]
Damn, that is some fine piece of work right there. Can't wait to see it in action
6
IsThisOrignal
I love these updates even if they arent always bi-weekly
2
AshoCinatee
But that's half the fun. If they were consistently bi-weekly it wouldn't be as special ;)
1
IsThisOrignal
Oh i agree lol
5
D1N2Y
Wait a second, we weren't due another bi-weekly update for another 3 months!
7
Matias_Backwards
Sick rifle! It looks so clean and, at the same time, so classic. You guys always make incredible weapon models.