Here we are back with another sort of bi-weekly update, sorry for missing that last update. There were some complications to say the least, but hey, missing an update feels just like old times huh? Let's not worry about the past though we're here now and that's all that's important.

To start off your December the right way I brought in GameSyns to tell you a magical story about a very strange fellow only known as "AI" who makes animations in the mystical world of Installation 01. Grab your pajamas, make a mug of hot chocolate, get cozy in front of the fire, and let's listen in.

Thanks for having me Sev! I’m super excited to be here today to share some of the awesome work coming out of our animation camp. AI (a super awesome dude and animator if you ever get the chance to meet him) dropped by to answer some pressing questions some of you might have about creating animations for Installation 01 and to show us some of the animations he has been working on lately.

In this first animation showcase, you can see several different animations for the Gravity Hammer, including primary and secondary melee attacks. Since we have AI here today, it would be a crime to not discuss his process of creating an animation from scratch.

Thanks for joining us, AI. We just checked out your latest animations for the Gravity Hammer. How do you create something like this for other weapons in Installation 01?

AI: "For me, animating for Installation 01 is a real lengthy process. I will try my best to describe and explain it, without being overly boring. It might take a while though. For a new weapon, I begin with making a rig for the weapon, and skinning parts of it to the rig. A rig is basically a collection of objects, that parts of a 3D model follow around, when they get moved or rotated. Skinning is one way to actually make parts of a 3D model follow the objects in a rig. In 3DS Max, I specify which object each part of the model should follow in the Skin modifier. Sometimes I need to do some searching on Google, watch videos on Halo weapons or real weapons, or ask the 3D artist who made the model to figure out which parts can be moved."

AI: "After the weapon's rig is finished, I move onto setting up the scene for the default posing of the weapon and the arms in first person. Setting up the scene is usually not difficult but it can take a lot of time. I import the weapon and the first person arms, which are already rigged and skinned by Matthew Lake. Most of what I do here will be getting the arms and the weapon properly posed together. I spend most of the time adjusting the how the hands grip the weapon. The first person view when wielding the weapon should somewhat visually pleasing and not overly obstructive. As the scene gets closer to completion, I usually ask for some feedback from the team, but I try not to wait too long for responses."

AI: "Once I have the default posing finalized, I can begin working on the animations. I work on animations one at a time. For each one, I first figure out what it should roughly look like and how long it would last. I prefer to get my inspiration from the FPS Halo games and other first person shooters. Next, I start working on a rough draft in 3DS Max, containing only the most important keyframes. They are the most important moments in the animation. A reload animation for a rifle with a non-empty magazine would have a rough draft that looks like this:
1. The beginning
2. Weapon is off to the side
3. Magazine removed
4. Magazine going offscreen
5. Magazine going to rifle
6. Magazine inserted
7. The end"

AI: "The rough draft will be refined and improved over time, as I adjust where the important keyframes and transition frames are, and what they look like. That part of the process could take a few minutes, a few hours, or somewhere in between. I may spend multiple days on animation before I am satisfied. As it gets closer to completion, I will ask for feedback and try to make it better. Eventually, it will be ready to be in the game."

Do you often look to official Halo games for inspiration or do you prefer to create animations without influence?

AI: "Generally, I use animations from the Halo games as a source of inspiration. I want Installation 01 to have a similar sort of style. I believe it is an important part of what makes Halo what it is. However, I do not want to just copy what Halo does. There are things that we could do better or do differently. It is possible to put in our own creativity while respecting Halo’s way of doing things, and that is what I would like to do."

Well, thanks for stopping by, AI! We're glad to get your insight into the process of creating animations for i01. These animations look amazing. I can’t wait to play Grifball and see these animations in the game!

The Holidays are a time for family and friends to come together and actually get along for a day, although it's not like that works out 100% of the time. The Installation 01 team in a way is a family, albeit a dysfunctional family, but certainly still a family and a welcoming one at that. If you've been missing that sense of togetherness, look no further. You can join our team and be welcomed in with open arms with the simple click of a button. Try it, it'll give you that warm and fuzzy feeling inside.

Patawan: “I'm thankful for all the feedback and friendship the I01 team has delivered and I can't forget, being able to fulfil my dream of making environments and learning along the way”

Feline: “I'm thankful for the chance to work on this project and everyone involved. I've never really had friends who like this kind of stuff so it's been a really great to talk with people who are passionate about the same things I am, and I'm very thankful that they take some of their time to teach me new tricks. I've learned so much from many people here so far, I'm excited to continue to learn more and to get to know each other better.”

Rsptim1: “I'm thankful for my parents, who allow me to sit at my computer all day working on Installation 01.”

Aviixe: “I'm thankful for Star Wars, the French, and everyone on the i01 team”

TheChunkierBean: “I’m thankful for all the wonderful family and friends that surround my life every day and the amazing opportunities I’ve been given through Installation 01.”

Road_Bone: ”I'm thankful that I was given a chance to work with this team. Seriously, like words can't describe how thankful I am to be earning experience, and to be able to get true feedback on the work I do.”

AI: “I am thankful for Bean keeping his promise, over 5 years after he made it”

Sev: “I'm thankful for Korean girls and most of the members of the i01 public discord, but more importantly the Korean girls”

LegendaryGamer: “I'm thankful Americans get to be thankful for something.”

BillyBob: “I'm thankful for this team helping me learn 3D art and all the memes we've created”

GeoBirb: “I am thankful for my parents not pulling me away from the computer”

GameSyns: “I’m thankful for the opportunity to work with such a talented team, my families support, and of course, MCC on PC.”

GingerKendall: “Thankful our team is the best looking dev team out there”

Let us know what you’re thankful for in the comments below! 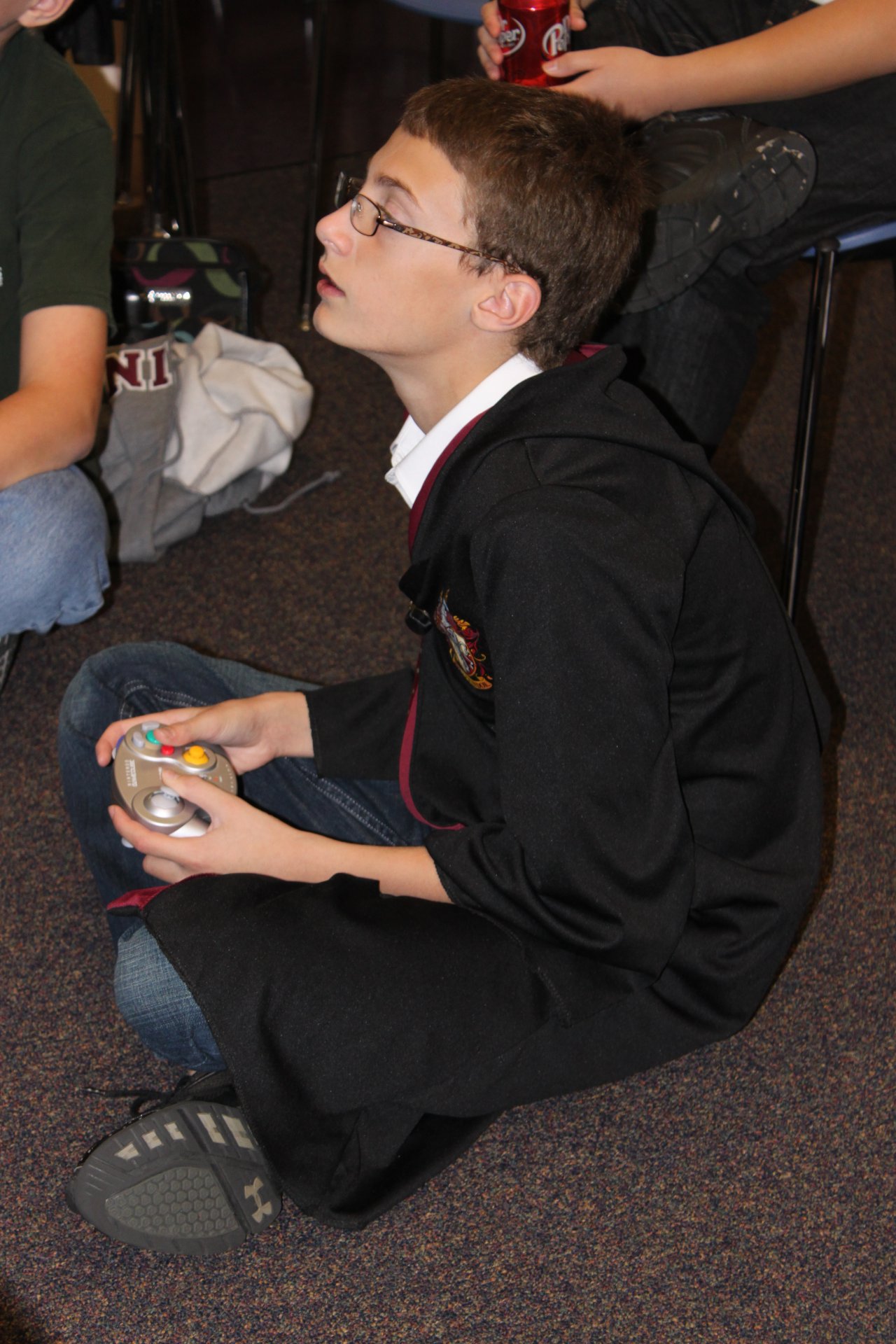 Bean found this strange looking machine at the side of the road and figured he would try it out for the hell of it. Who would’ve guessed it was a time machine (certainly not Bean). He “accidentally” went back a few years to when times were simpler and now refuses to come back. I can't say I blame him. Of course this has delayed our efforts to finish the game, so that's a small problem that we’ve put on standby while we try to reclaim him from the past. I'm sure we'll be back on track in no time though; nobody can escape the soon™ forever, not even Bean. In the meantime, he'll be playing Super Smash Brothers Melee for the Nintendo GameCube and drinking Dr. Pepper (the intellectual drink for the chosen ones).

Well that just about wraps up this update. I just wanted to say how thankful I am to all of you guys who have stuck by us and taken the time to read these updates. Also big thanks to GameSyns for helping out with this update. Since it’s now December and we’re starting to officially enter Winter, remember to bundle up and stay warm. We can’t have you getting hypothermia before you get a chance to actually play the game.

3
elusiveTranscendent
Lovely and awesome update as always!
10
KDVX
May i ask why you guys dont release an alpha or anything for people to try? Edit: i literally get downvoted for simply asking why theres no alpha? Fuck this.
9
iDareToDream
I'm getting the sense they're still not even close to an Alpha build yet.
5
DooD_Eternal
I don't think it's that far yet
1
topkek2234
Yikes
3
MyTeenageBody
By the time is drops nobody is going to care for this. All of the halo games will be out on pc before this even has a build for the public to try.
2
Sergeant_Qwertzy
Even with MCC out, I'm still very excited for I01 to release and will 100% play the hell out of it when it releases. Keep up the good work, boys.
1
wifiwolf23
Is Bean wearing a robe of Gryffindor in the past?
3
MascotTheChunkierBean
Yup lmao
-1
DooD_Eternal
Who is Sex, and how did I offend her?