Hey everyone! We’re back with another Weekly Updoot! Apologies we missed last week, our schedules have been quite filled as of late and Train dabbed so hard that he needed an extended break. To get back into it, we’ve got a light load this week - but we can’t be more excited to show you what we’ve been up to - let’s get right into it!

A Team For Effort

As always, we're looking for the most talented people we can find to bring onto the team to help us make Installation 01 the best it can be. Right now, there is no listing for it, but we're looking for a female vocalist who happens to play the saxophone. Now I know this is a weird request, but if that’s you, please get into contact with us.

For the rest of you, not-female-vocalist-who-play-saxophones we’ve got plenty of open space, just click the shiny button below and find your fancy.

NOTE: They do not need to be the same person, we'll accept these skills separately.

We’ve got some new additions to my collection here in the form of Brett Tucker more commonly known as “The Dongrel” and Patrick Hewitt who goes by “Pat-a-wan”. Now you might be thinking to yourself “Really Tosh? A Padawan, and a Dongrel? What even is a Dongrel!” Well, I will admit it is not my best moment, but they are incredibly talented developers that we’re lucky to bring on. Let’s get to know a little bit about them! 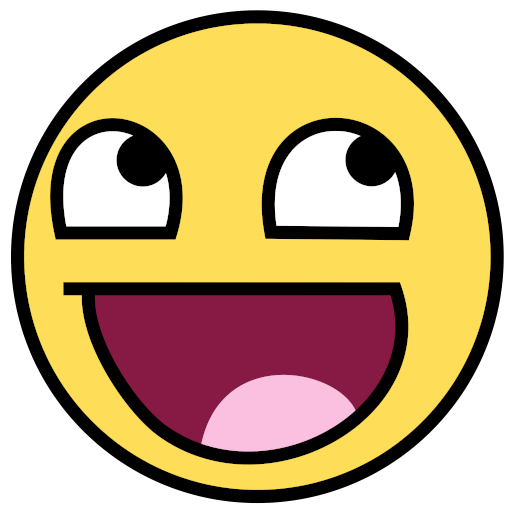 Patrick “Pat-a-wan” Hewitt is a 3D artist here on the team. Patrick previously has never worked in the games industry but has enjoyed his time working his way there. Along that journey, he has decided to stop for a moment and join our team. Like many of us here, he is a lifelong Halo fan but started down the dark path of fan-games, old art styles, and gameplay. Previously Patrick went to university for 3D Animation but never really found his calling until he got involved in 3D modeling, and environments. While most of his work has been in the Unreal Engine he’s ever eager to learn more about Unity to help our team progress in our goals by providing some beautiful models, and environments. 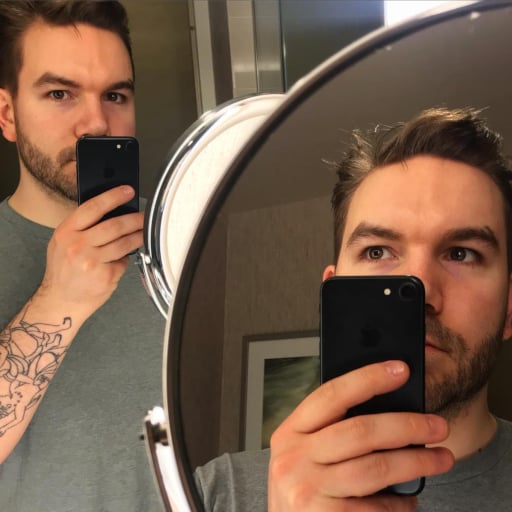 Brett “The Dongrel” Tucker is a self-taught environment artist following a career in the fine arts for a number of years now. He’s just getting into his fan-game career with Installation 01 being his first, along with “Skyblivion” which he joined around the same time. He has also recently started working as a freelancer at Nickelodeon, which is pretty cool, right? His BFA in Sculpture isn’t of much use here but maybe he can make some custom Soon Studios Bean figures for us one day.

You’ll be seeing some of their work in the future as well as learning all about them in upcoming Team Focus updates, but for now, please help us in welcoming these two very talented artists to the Soon™ family.

These developer insights have been quite successful in the past couple of weeks, so we’ve invited the one and only Matthew Lake to sit down today to tell us a little bit more about animation. Take it away Matt!

Hello, one and all - it’s been a while since I did a piece for the site so it’s lovely to be back in your company, let’s get right into it! Our ol’ boy Tosh has invited me over to discuss some techy behind-the-scenes details about what I do on Installation 01, and hopefully spread some education to those interested in game/film development, or even just a peek at how we make stuff! Today I will be walking through a little piece of the bigger animation picture, this piece is right at the beginning of the pipeline - rigging!

Character rigging - it’s a big thing, it covers everything from the generation of bones for deforming vertices, to solving of complex joint systems and even the creation of a control rig in which animators can manipulate to create lovely animations. But where to begin?

Everything starts with a mesh... Here’s one we made earlier... a few months earlier admittedly.

So now we’ve got a lovely mesh from our wonderful artists, nicely unwrapped, fully textured, with that lovely deformation topology, fully ready for us to rig - but where do we go from here? Anatomy! This is a crucial field of study in organic rigging, whether you are rigging a bipedal character, or a quadruped like a canine or a horse, the placement of the bones is absolutely key. This is due to the exact placement of the bones dictating the rotation points of mass on the character, so good placement determines good or bad deformation - imagine having a character’s forearm rotate and half their upper arm goes with it and it does not pivot from the elbow? That’d look silly! Reference is always king! 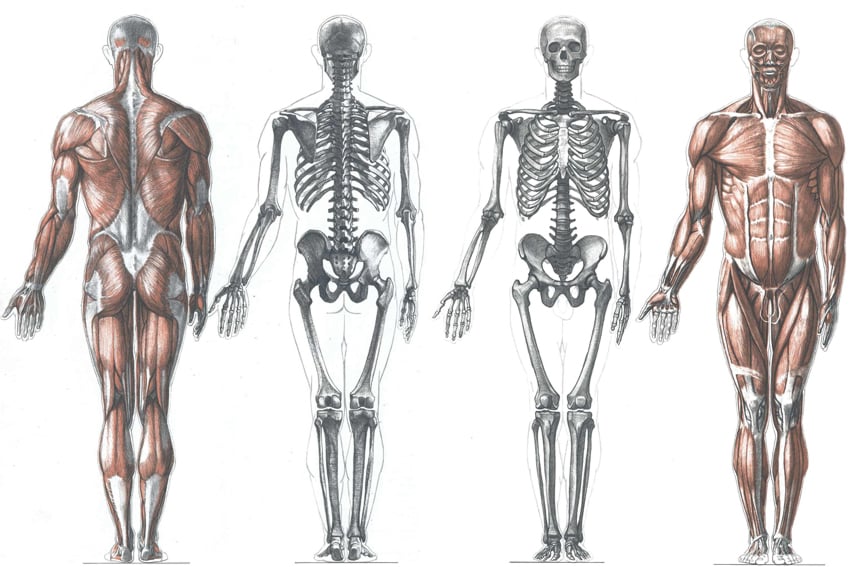 When referencing anatomy always try to see where it can line up with your mesh, and you may have to make some concessions where they do not. In rigging, discrepancies can pop up while referencing anatomy, especially within games or films with stylised art - this could result in characters with extended limbs or odd sized volumes, so sometimes it’s always best to take some things with a pinch of salt and see what fits your project best! Spartans are a tad on the stylised size proportionally, especially in the shoulders, but for the most part, they are fairly ‘realistic’. 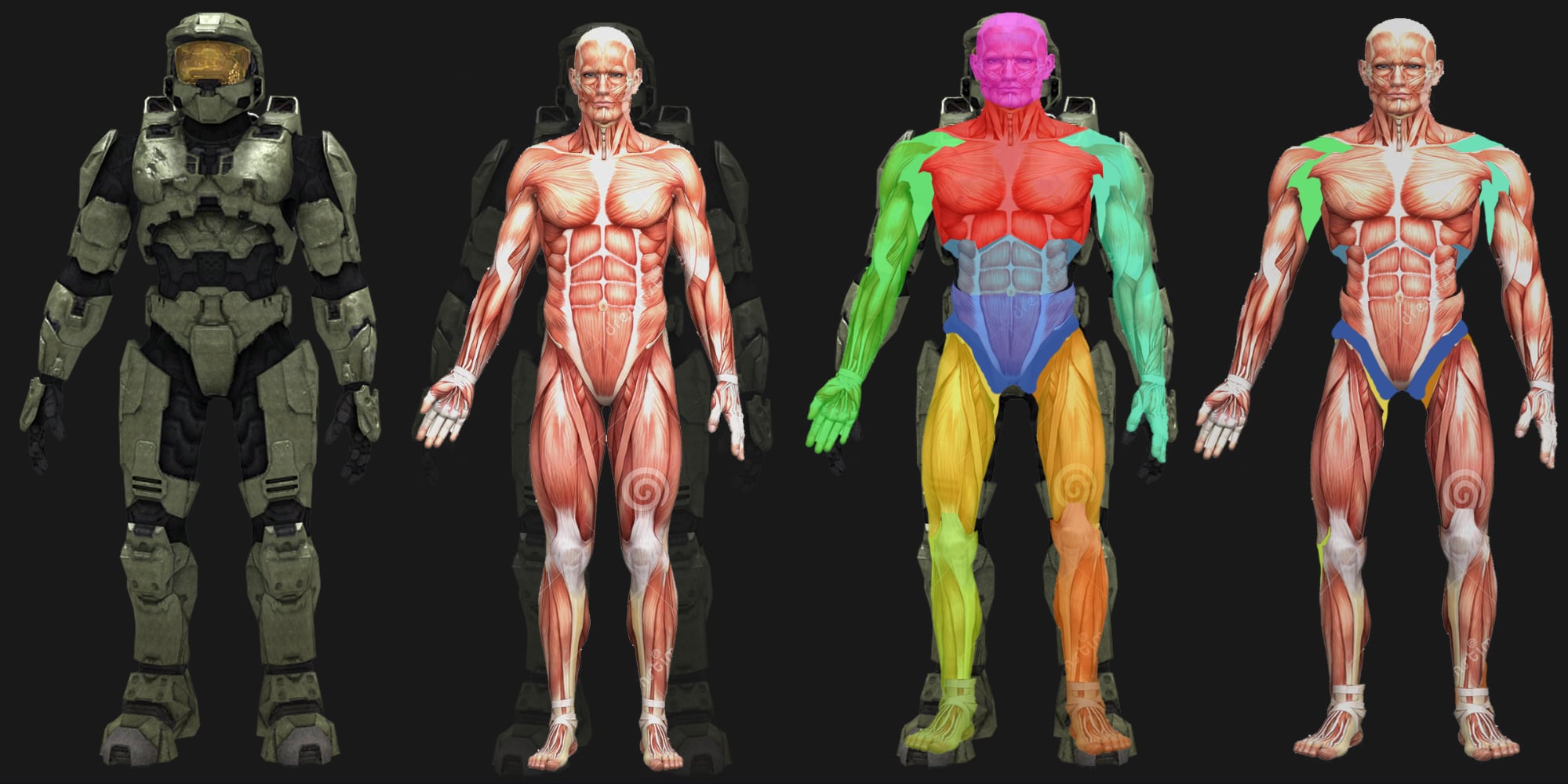 Alas.. our bones in our tech-suit: 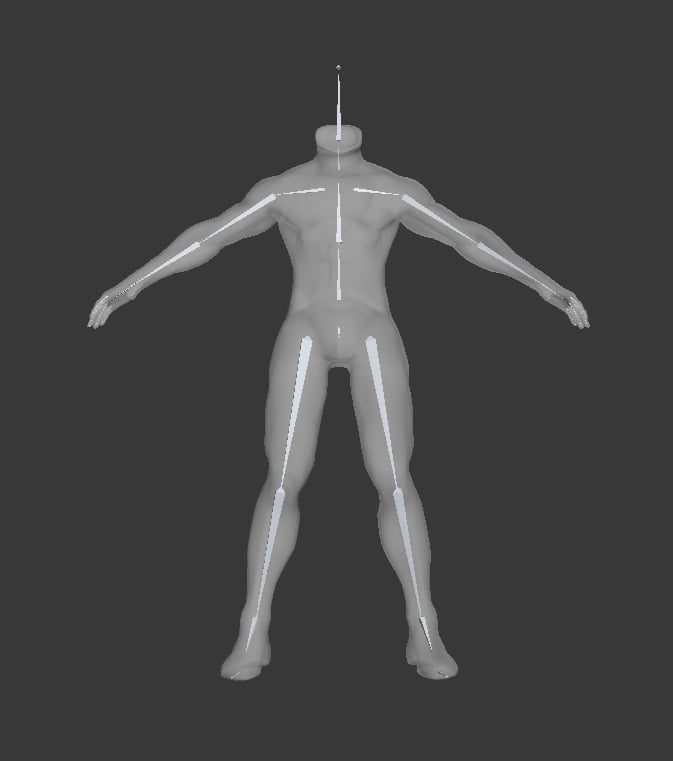 Wonderful - now we’ve got our bones in place we need to make this move! For this, we will be utilizing a technique called skinning. With skinning, you define a “percent” or “weight” that each vertex is to a specific bone - want a vertex to go 1:1 with a bone? You 100% it, do want it to share weight between two bones? Allocate 50% to each bone. It’s a fairly simple premise, and tools inside 3D applications allow you to manually weight each vertex or paint them with a brush. There are benefits to each method - I personally just do broad strokes with a brush, then fine tune on a per-vertex basis. 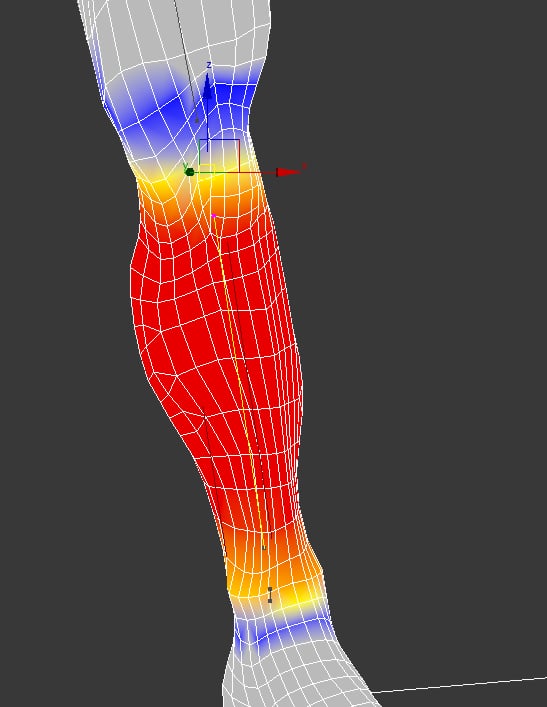 The example above is a simplified weighting on the calf - the color indicates the percentage of weighting to the specific bone, with red 100% through yellow, blue, and finally grey 0%. Different applications have different heatmap colors, some even just go from white to black. 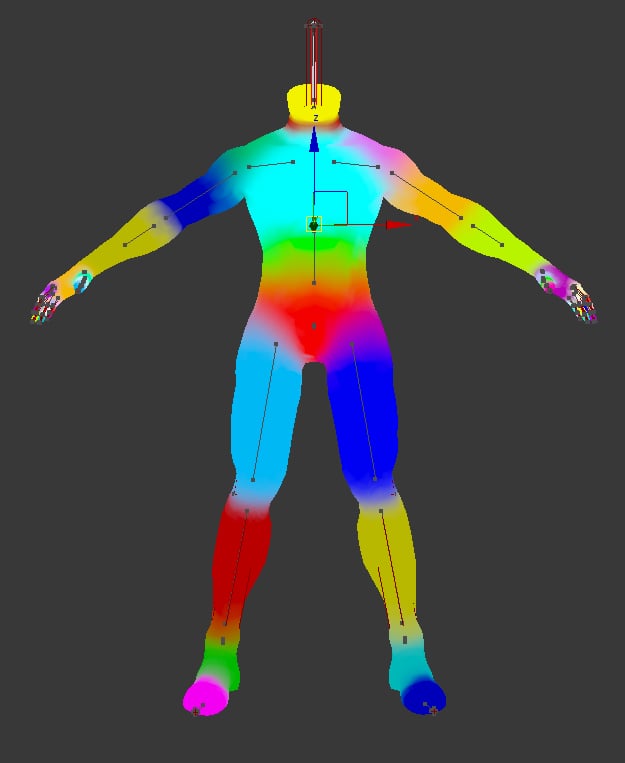 After some work, the first pass skinning is done. The technicolor techsuit there indicates the weighting of each vertex to each bone. So now we’ve got a fully moving techsuit, but we’re not done yet! Although this is an exciting moment, it’s typically best to hold all the horses and stress test the rig before jumping any further - animate with it, put it in an engine, see how it performs and the issues will highlight themselves... 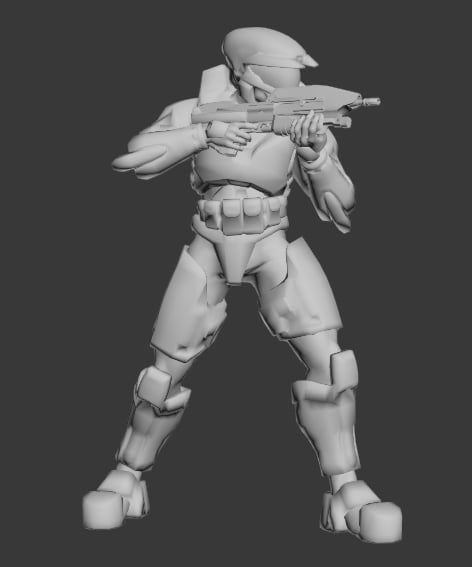 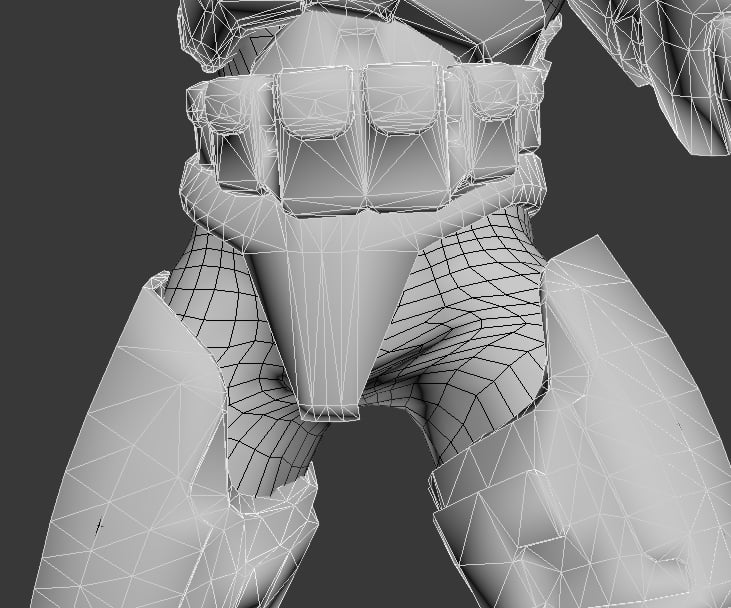 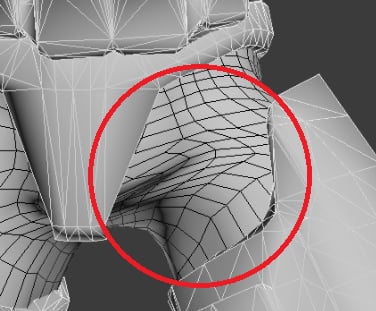 So what can we do about this? We could oscillate back and forth between skinning and animation until we got the perfect results but we will never acquire ‘perfect’ results in areas like this as skinning is inherently a flawed system, it doesn’t behave exactly like how its name implies. The cause of this is a huge mass of vertices have been moved a large amount and are stretching and smearing between several bones, areas like the crotch and the shoulders which have lots of influencers are big trouble areas. The alternative? If this was a pre-rendered film we could calculate proper skin and muscle systems but they are far too expensive computationally, so what can we do?

Solvers! Solvers are additional bones added to a skeleton to fix bad deformation, an example of these are ‘roll bones’ or ‘twist joints’. We’ll get more into what Solvers are, their benefits, and where we apply them in a future update. Sadly, that's all the time we have today, hopefully, there are some nice tidbits in there and I hope you may have learned something! If you like this kind of stuff let us know on our Discord and I’ll follow this up with more!

As always you’re a blessing of knowledge Mr. Lake - as Matt said, please let us know if you enjoyed the section. He has plenty more to talk about and I’m always looking for a reason to sit him down and pick his brain for all the interesting information he has laying around.

For those who may not know, during the month of October, developers get together to celebrate the creativity of video game designers and encourage the sharing of "blockouts" that you would otherwise not see too often. To get in on this wonderful event we wanted to share with you some of the blockouts you may have already seen a little bit of, but also show off a never before seen concept art piece of Goliath to celebrate inktober as well. Let’s get right into it!

This map is called New Order, is it a medium-sized, Big Team based map that is completely original to Installation 01. To better give you the feeling of an urban warzone we’ve stayed to industrial map design with emphasis on metal and a beautiful city skyline. 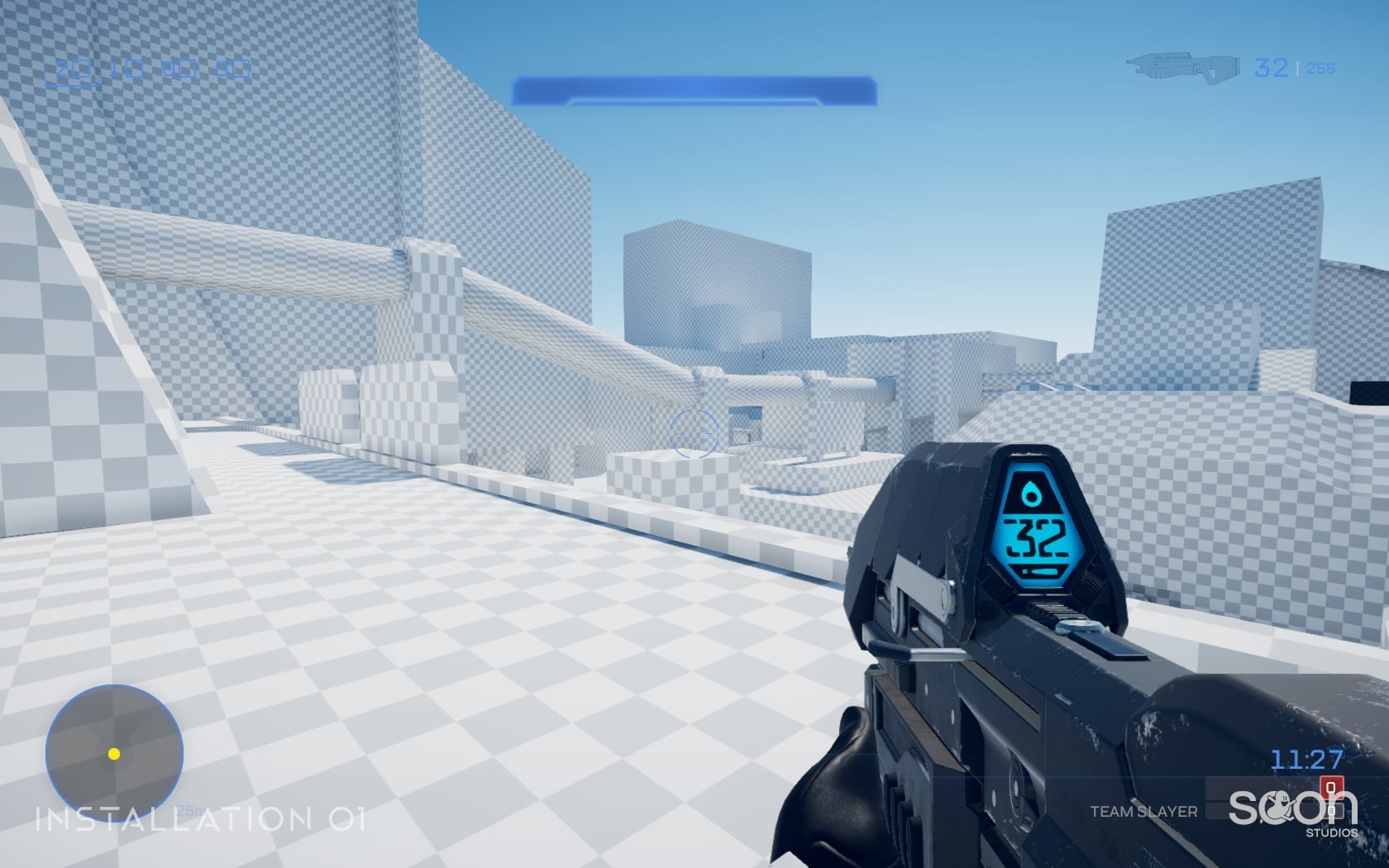 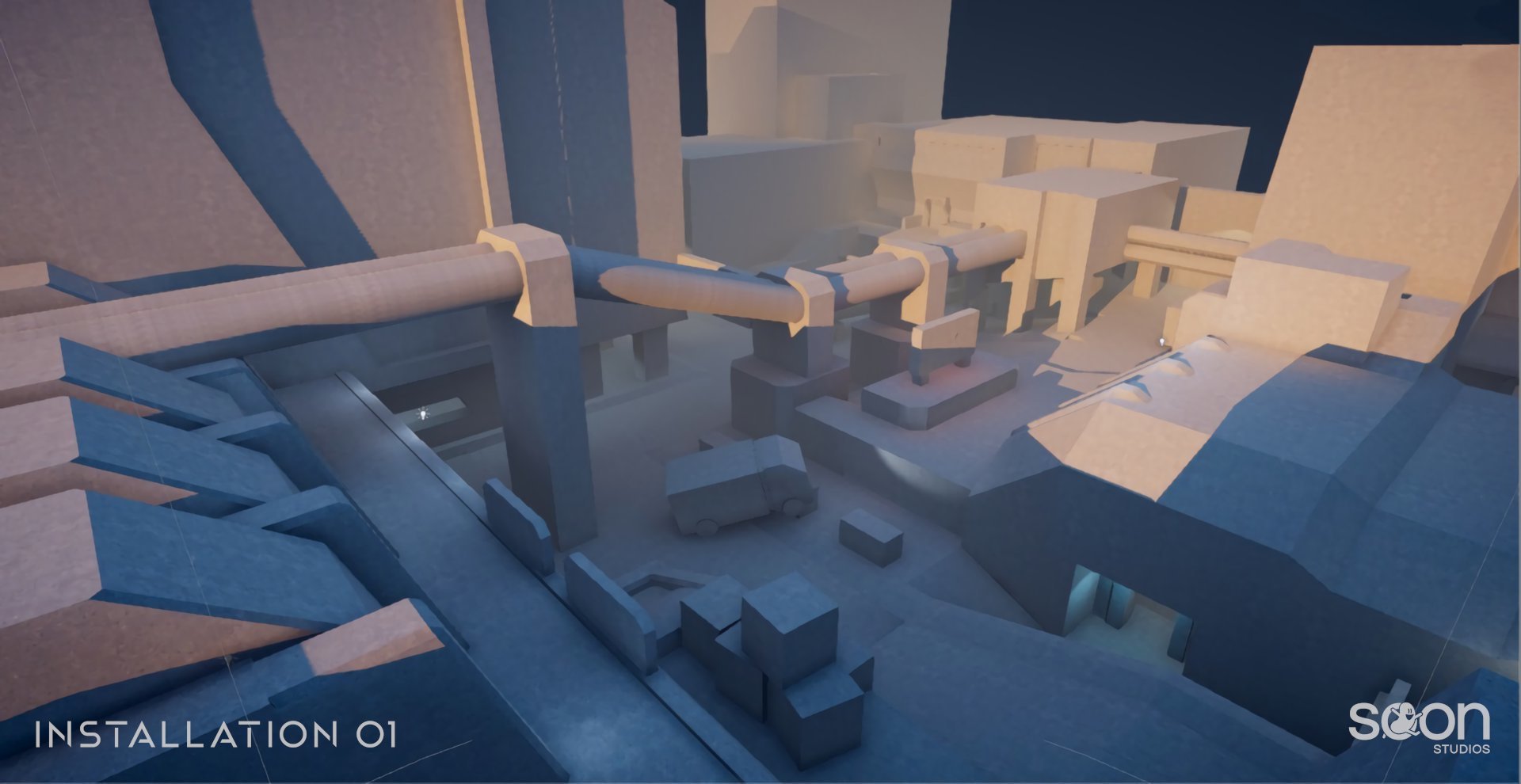 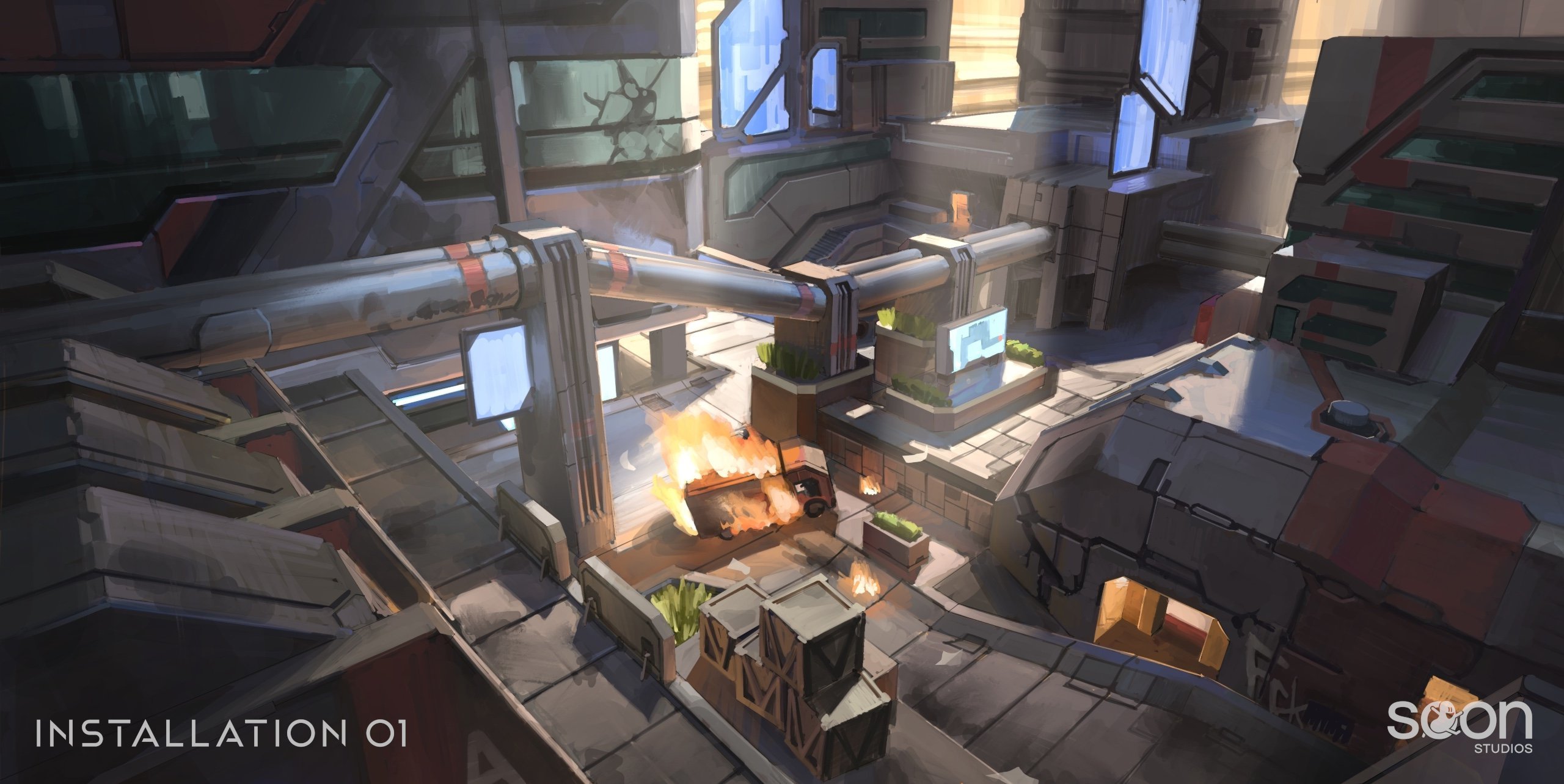 This is not the first time you’ve seen the map, and it will absolutely not be the last. But even as it stands you can really tell how it will be something really special once finished.

The one you’ve been waiting for, this lovely map is called Goliath. It is a medium sized free-for-all focused map that will give you that sense of discovery from it’s over-grown, abandoned hanger, military base-esque design. 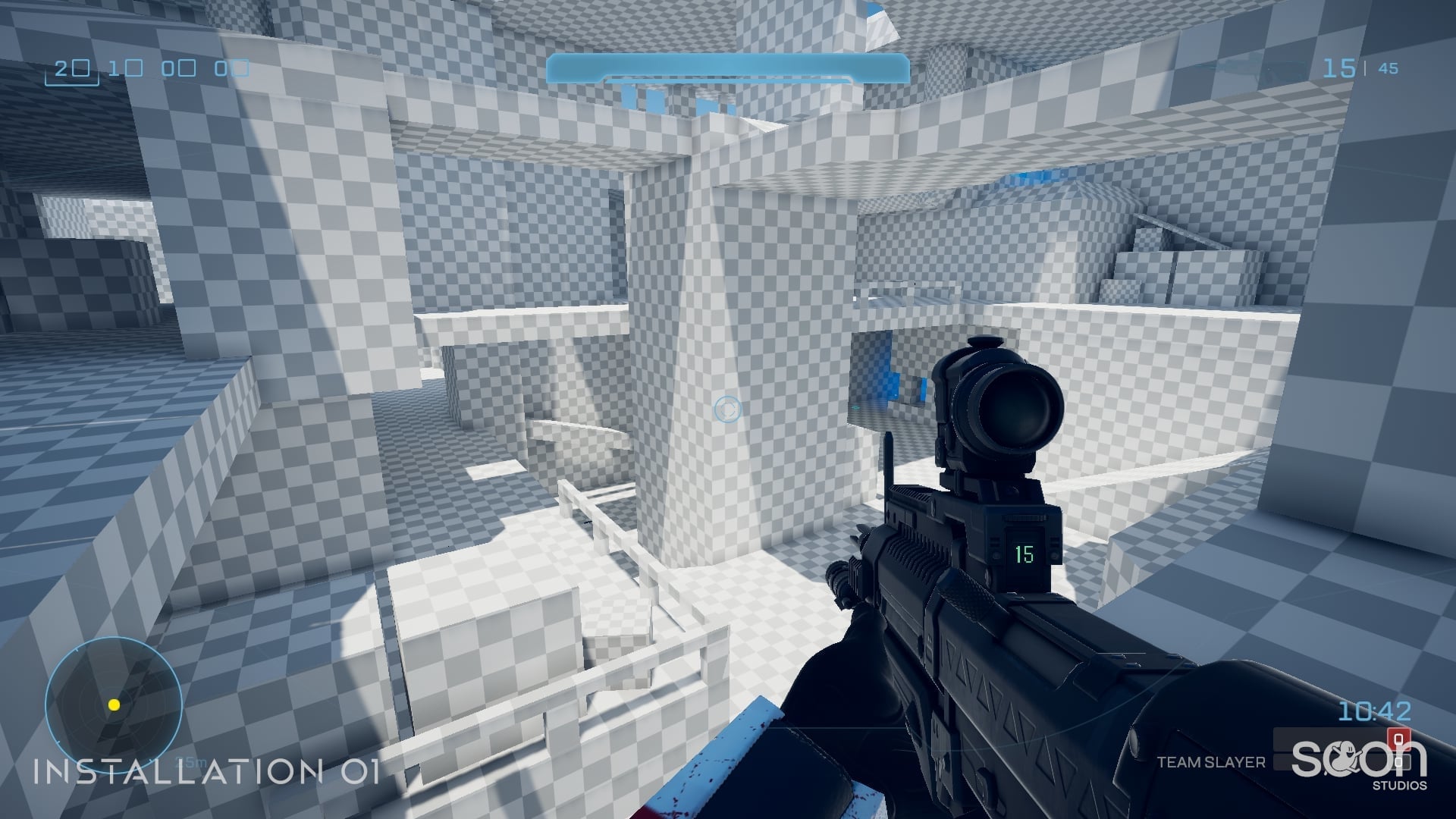 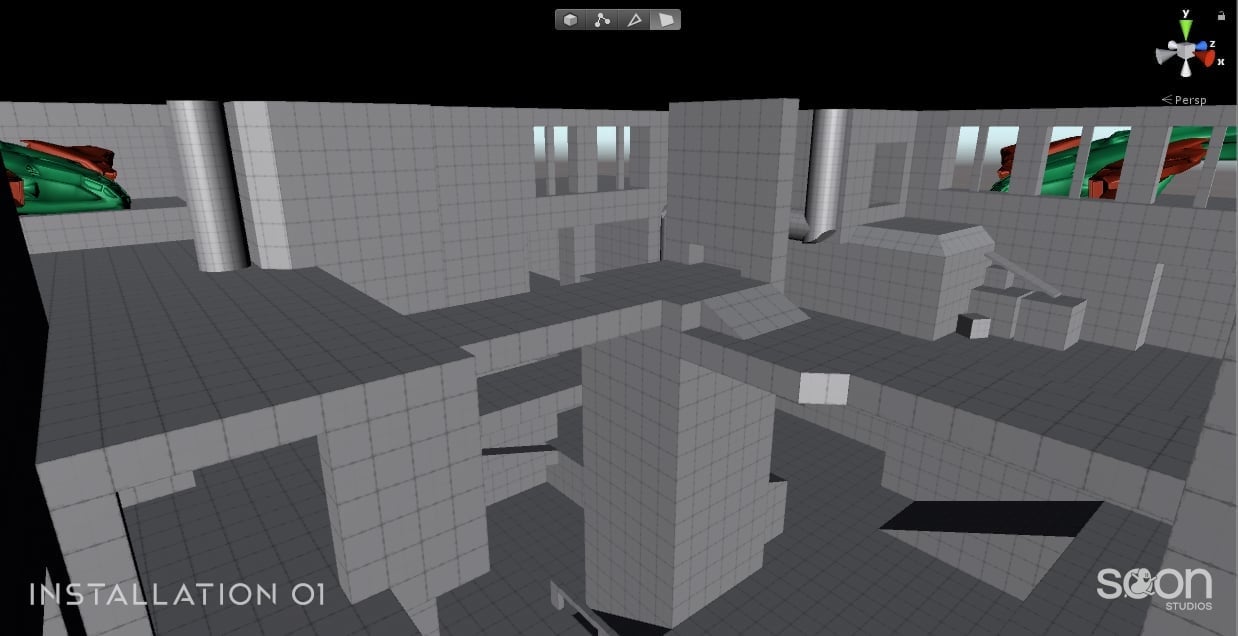 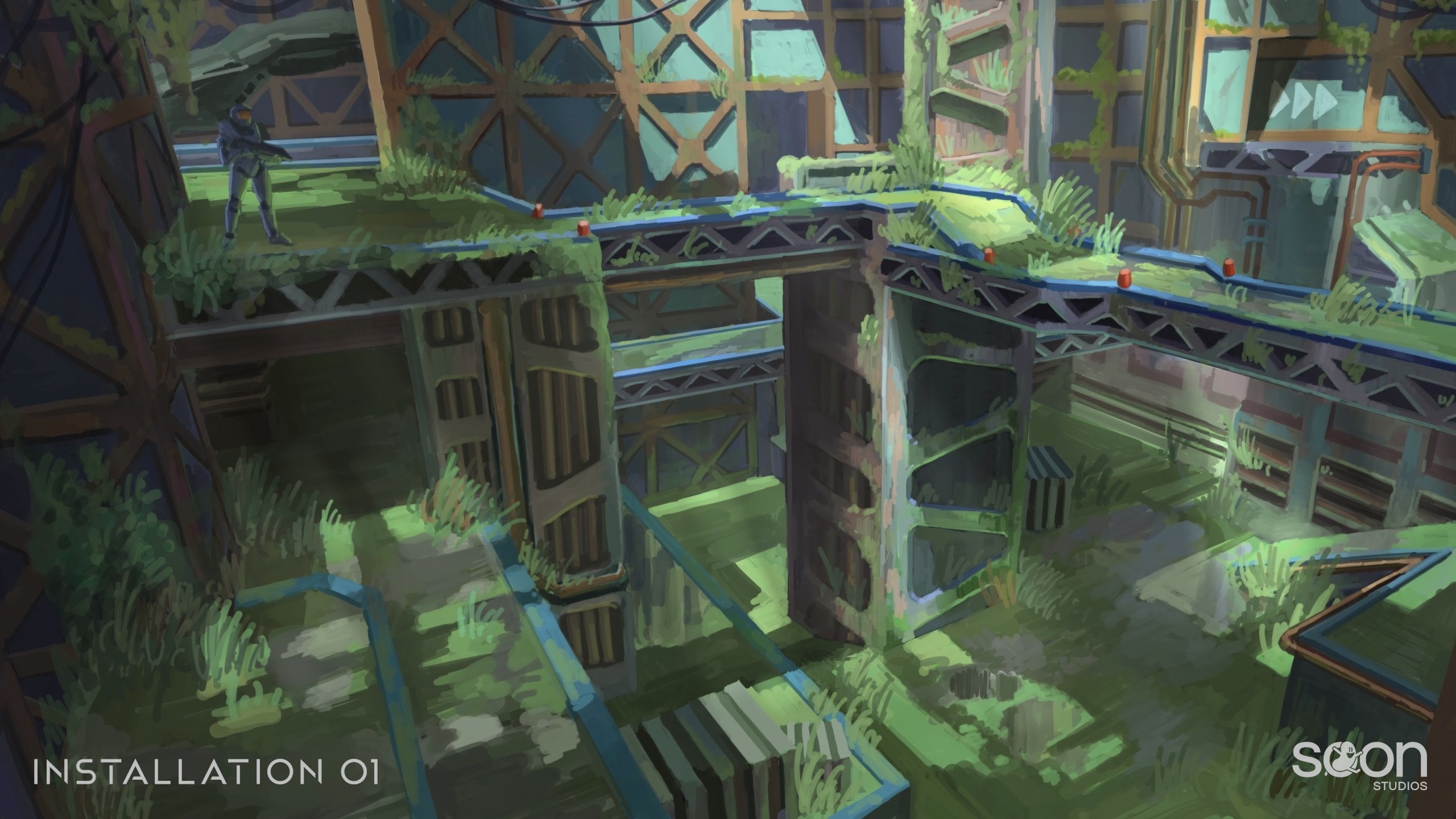 There’s something about rusted metal, grass, and abandoned vehicles that I find so appealing.

Lastly, the smallest, but definitely not the least - Judgement. Judgement is a small map that will focus on fast-paced team/free-for-all styled play that competitive players have come to love. We’re really hoping to capture a unique feeling to this map in a sort of garden/holy place of worship for the Covenant within High Charity based off of the hanging gardens from Halo 2. 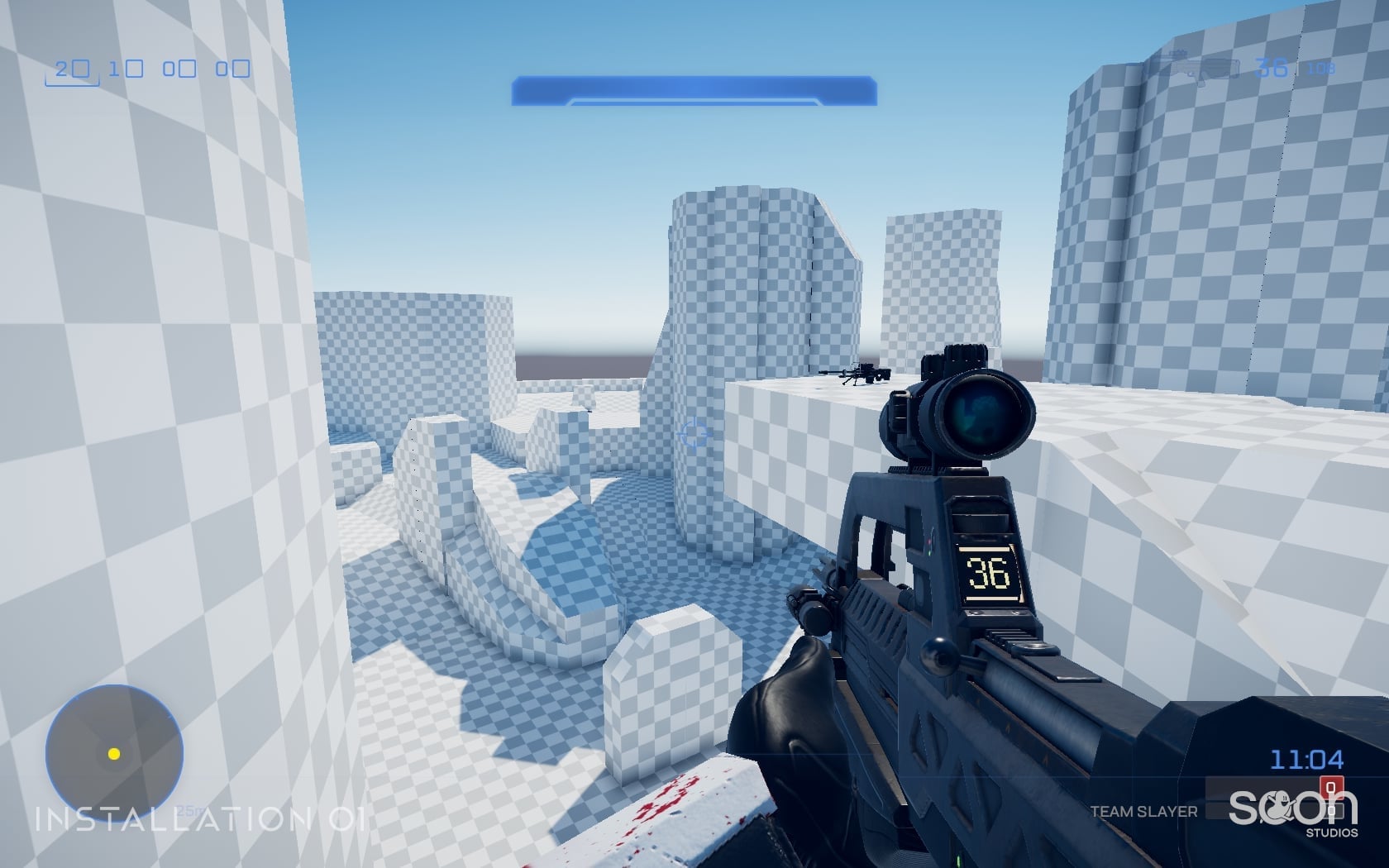 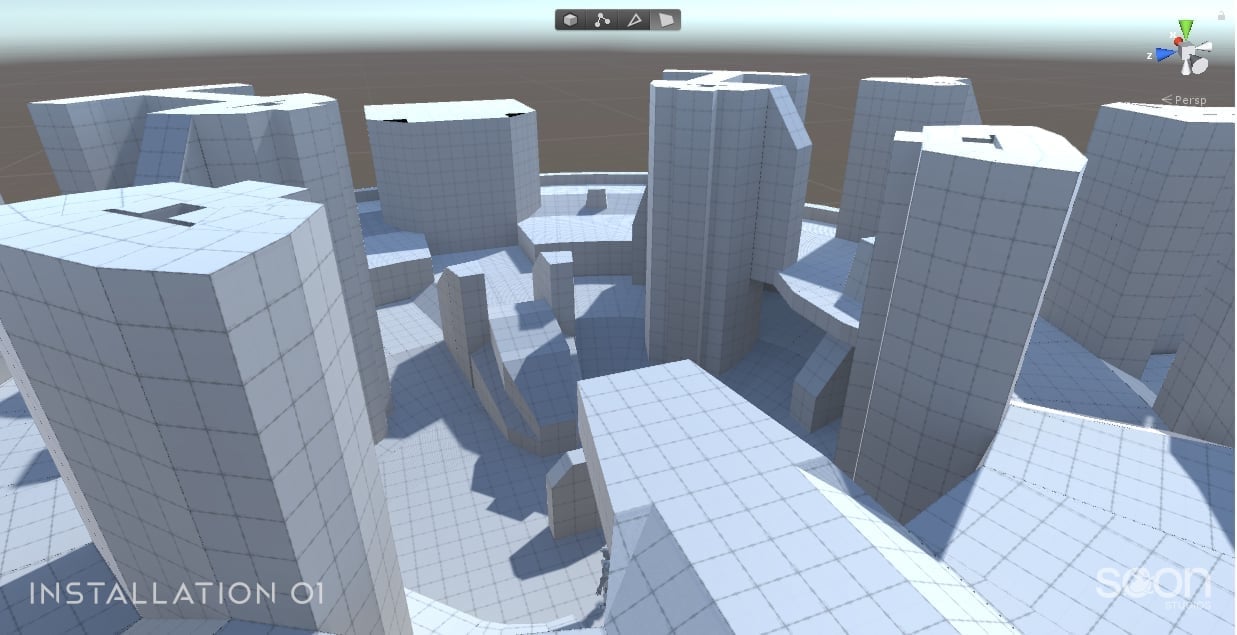 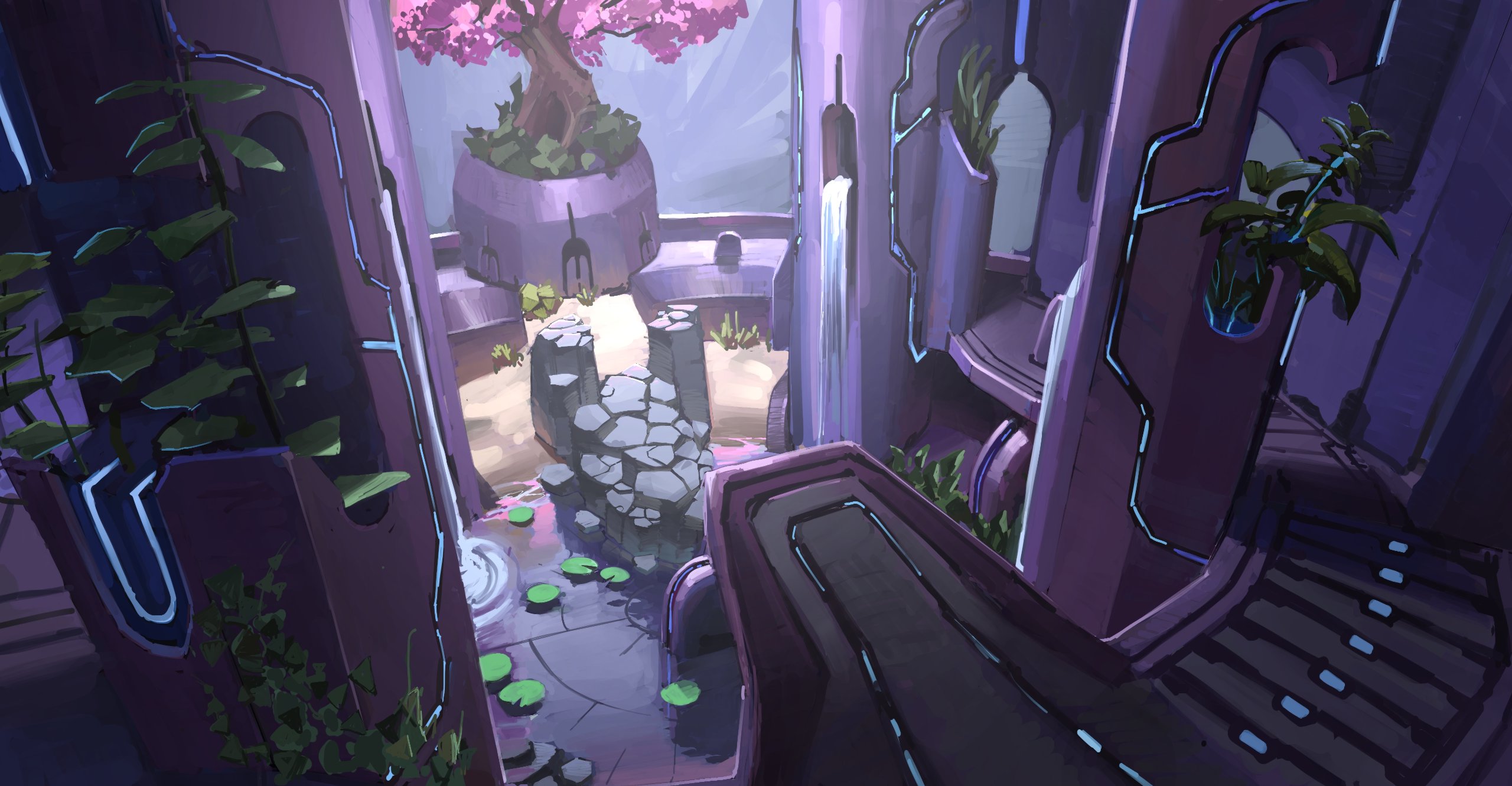 As you can see the team has achieved just that even in the early stages. It still has a lot of work to do, but it makes you love seeing blockouts and concept art because they are a beautiful showcase of two beginnings, both wonderful works of art that will unite and become one.

I know these may not be new to some of you, but in the spirit of Block/inktober, we wanted to show you how these stunning works of art start. 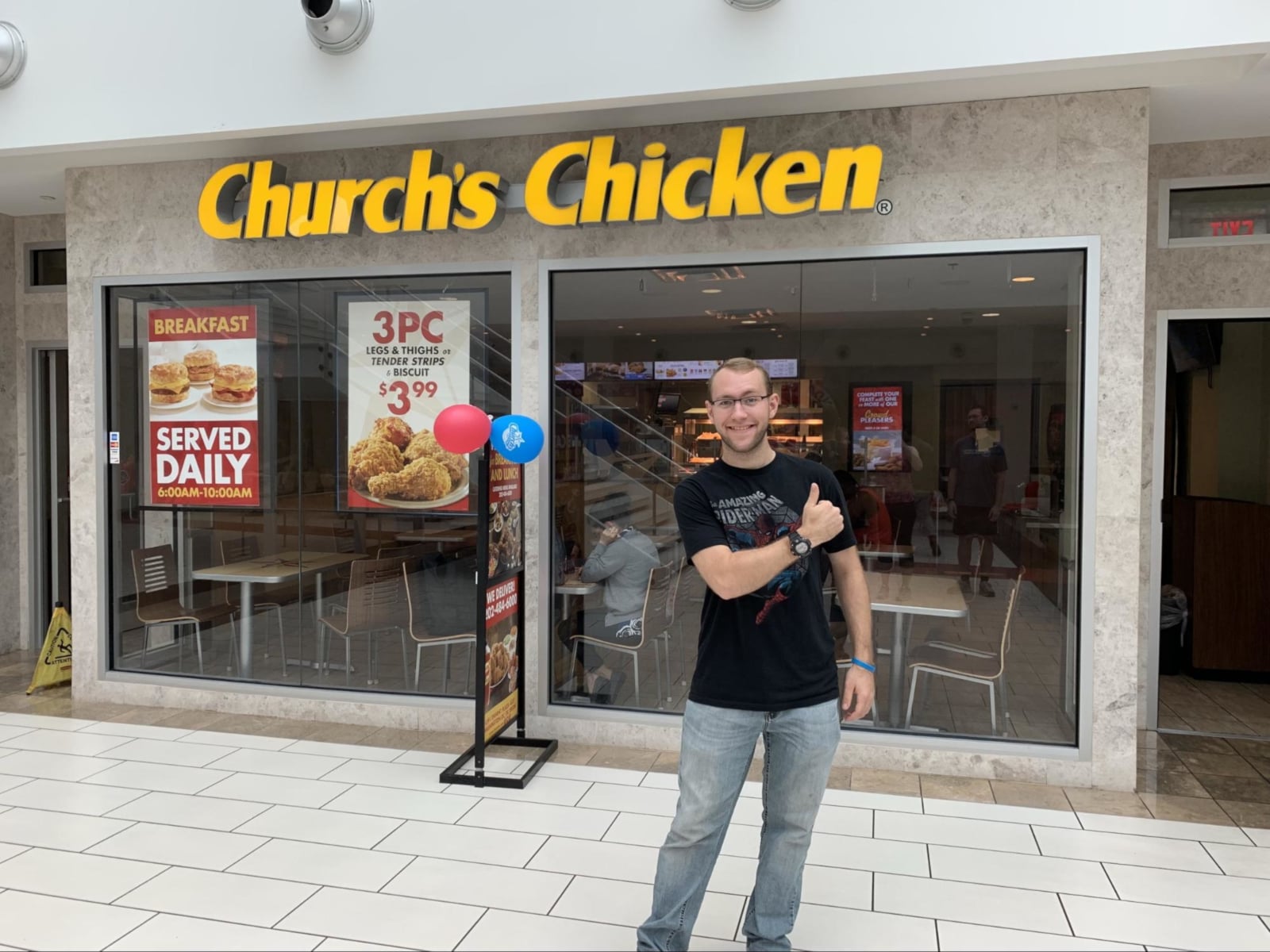 Bean is out for the week, so that means Church had to take over, much like Bean it is all his fault nothing is getting done. This is the last update we’ve had on progress so far.

That’s it for this week folks, we’ll be back at it again next weekend with some more insights, models, and the return of the Community Spotlight section! I hope you all have a great weekend, and a wonderful day.

13
UndeadWaffles
God damn these models and concept art look good. More than anything else, I am so glad you guys understand and are (perfectly) remaking the Halo aesthetic.
1
TheAlbinoMosasaurus
They are doing a better job than 343i, that's for sure
7
xdveryboringname
All aboard the updoot train!
6
n0rthm0nk
Judgement <3
7
Pilot-11A
When you hear the Goliath roar... You know the Judgement has come. And that a New Order will arrive. They call it... Blame Bean.
2
that_guy_can_fly
Just got a pc and can't be more excited for this game