Welcome to a super sp00ky Bi-Weekly update. Blaze has stopped by to share some Skeletons of a Map and share unseen images from before. There is a ton to dive into so make sure you clock off of work before you read this. You all set? Let’s go.

Some of you may have been following Blaze on Twitter and seeing his on-going Blocktober updates. If you are unaware of what a blockout is in regards to map/level design; A blockout is a very basic layout of a level and is used for gameplay/flow testing. It is a ‘rough draft’ of a map before the artists come in and do a detailed art pass. Images shown below are from the blockout stage of our wonderful map, Burnout. This map is inspired by the classic level, Lockout, from Halo 2 and its respective remakes in later iterations of the Halo series. Blaze offered to take us behind the scenes of the blockout stage of Burnout and offer us some in-depth details of its design decisions. 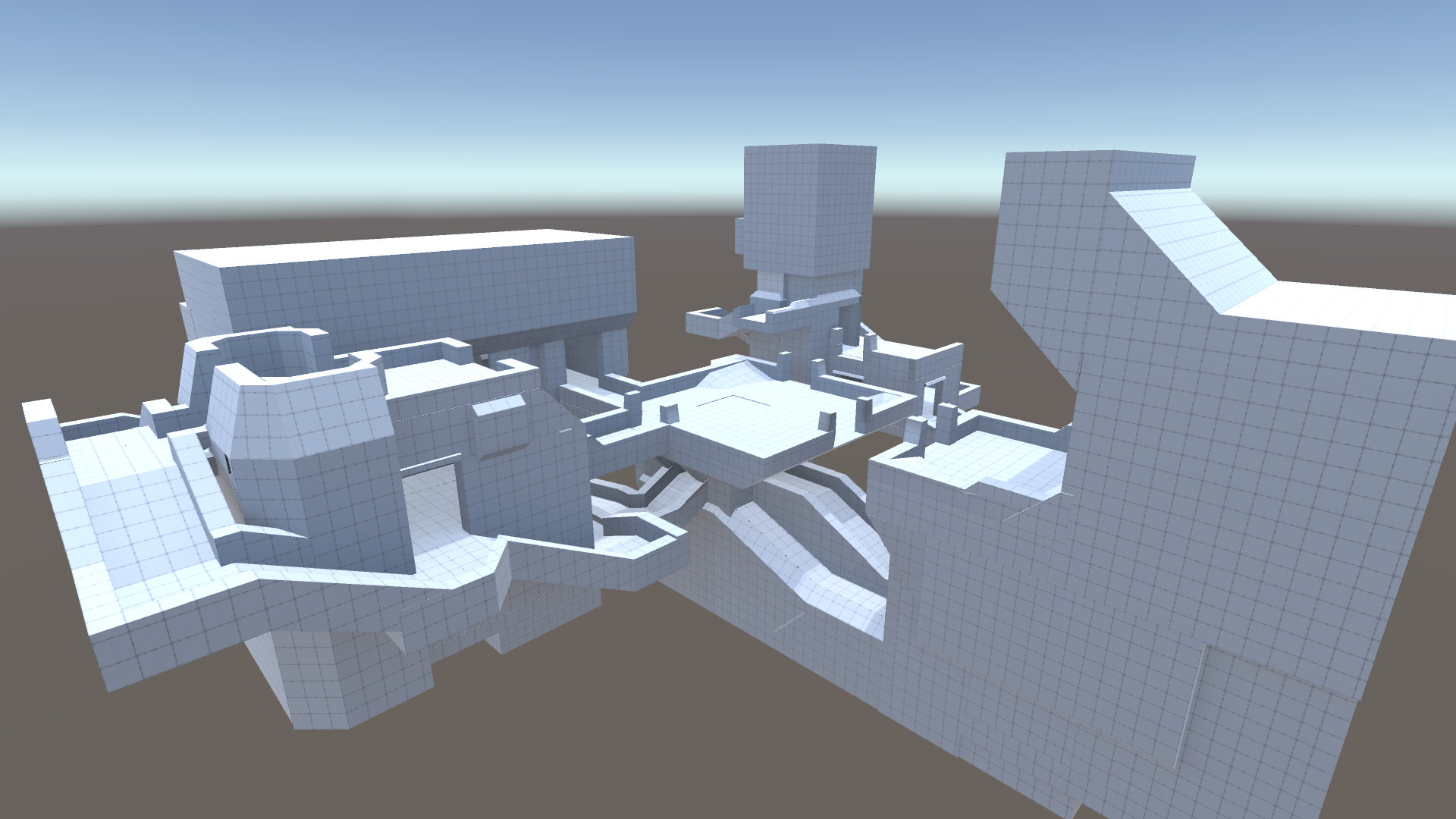 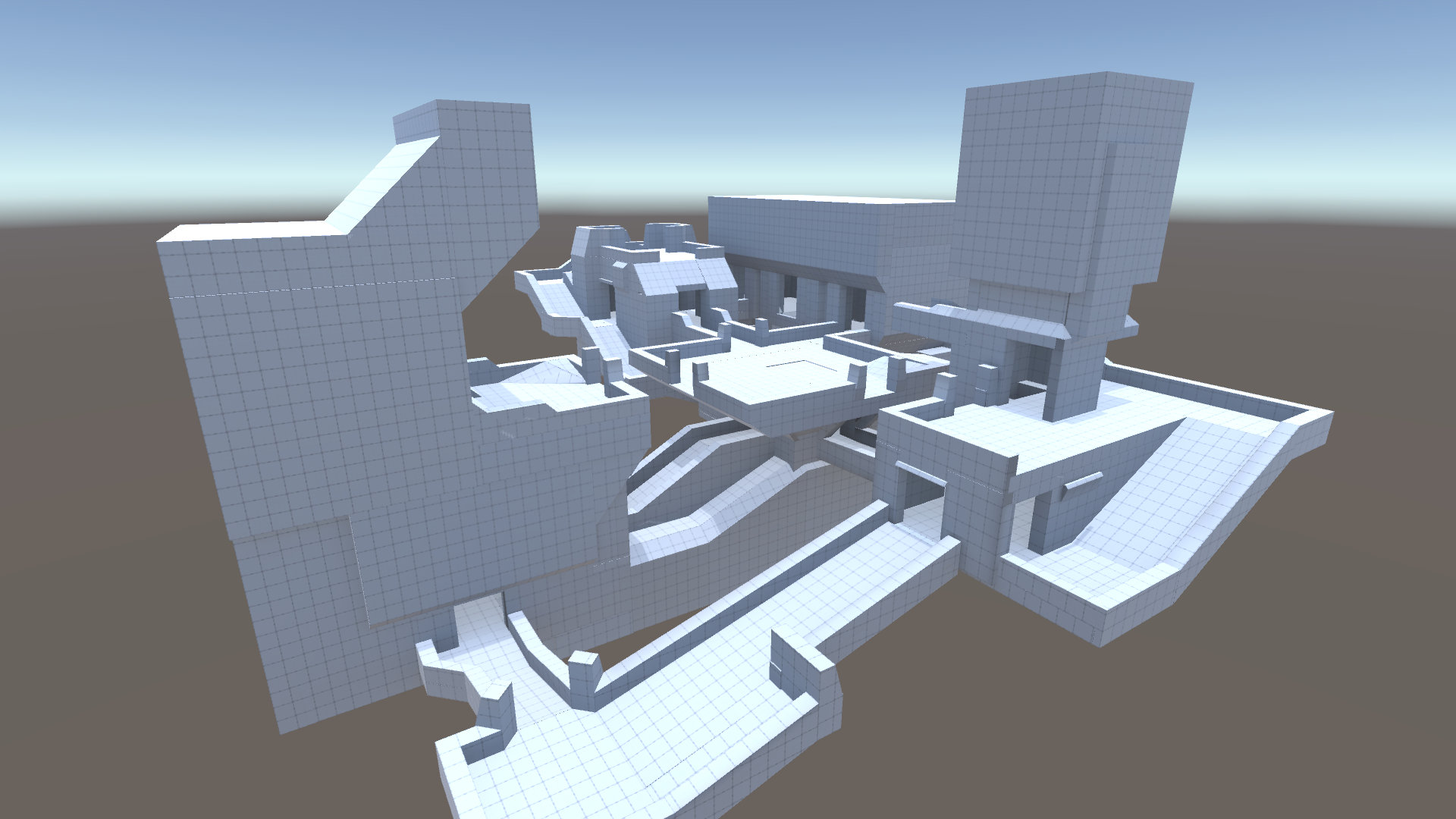 Welcome Blaze and thanks for coming by and chatting with us all. There are a ton of maps you could do for i01, what inspired you to choose a recreation of Lockout?

Blaze: "I’m not entirely sure if I’m being honest. I’m not huge on remaking maps. Of course, I love playing them. Making them? Not usually my thing. When I joined, there were a couple of remakes already built out. I remember one of the big reasons that I wanted to join and help out was because of some imperfections in those maps. My first conversation with anyone on the team was actually my concern regarding them. They were still well done but having played them 1000s of times, I could see differences immediately and could only assume that the community that would eventually play them would question those differences just as I did." 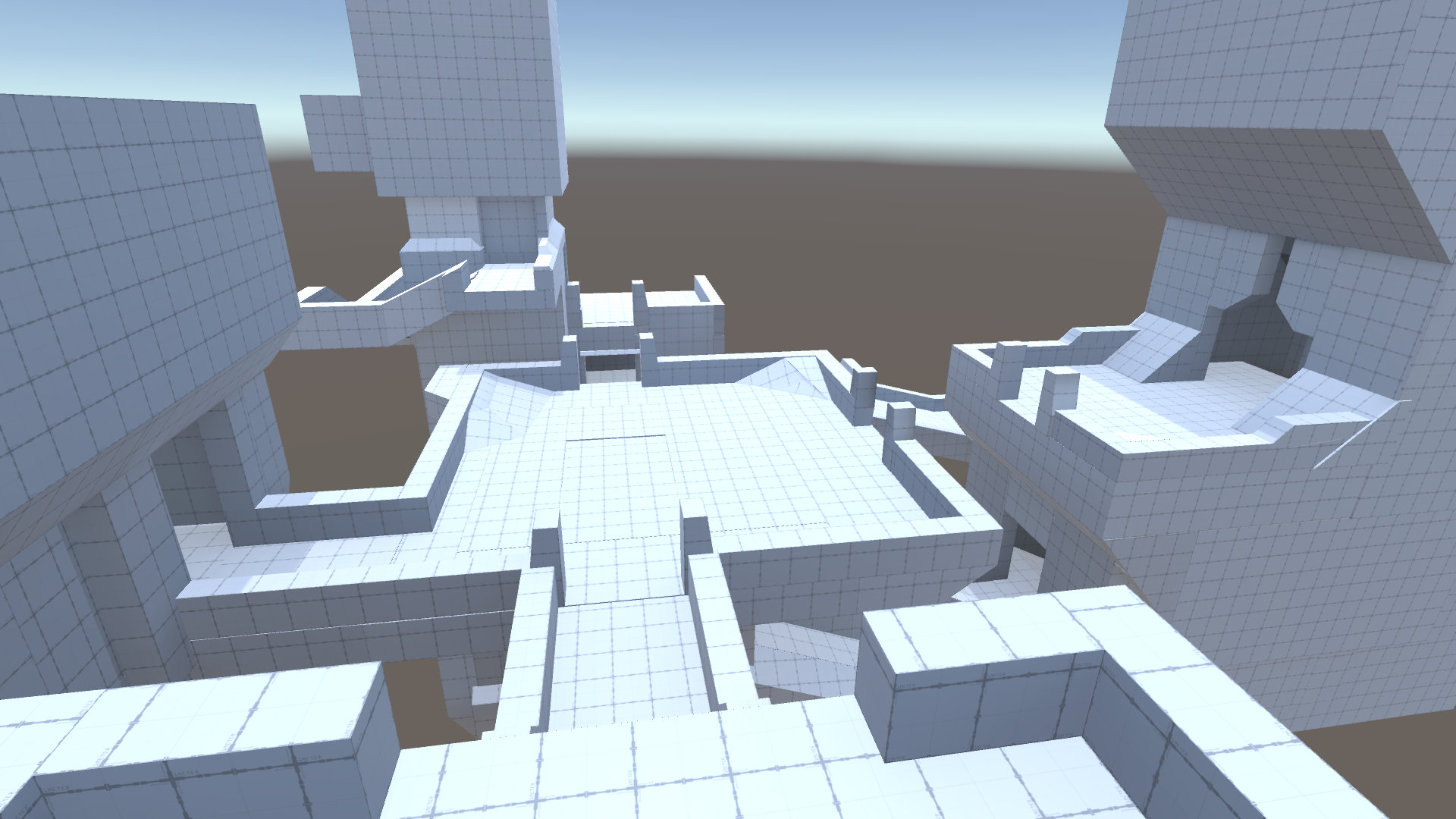 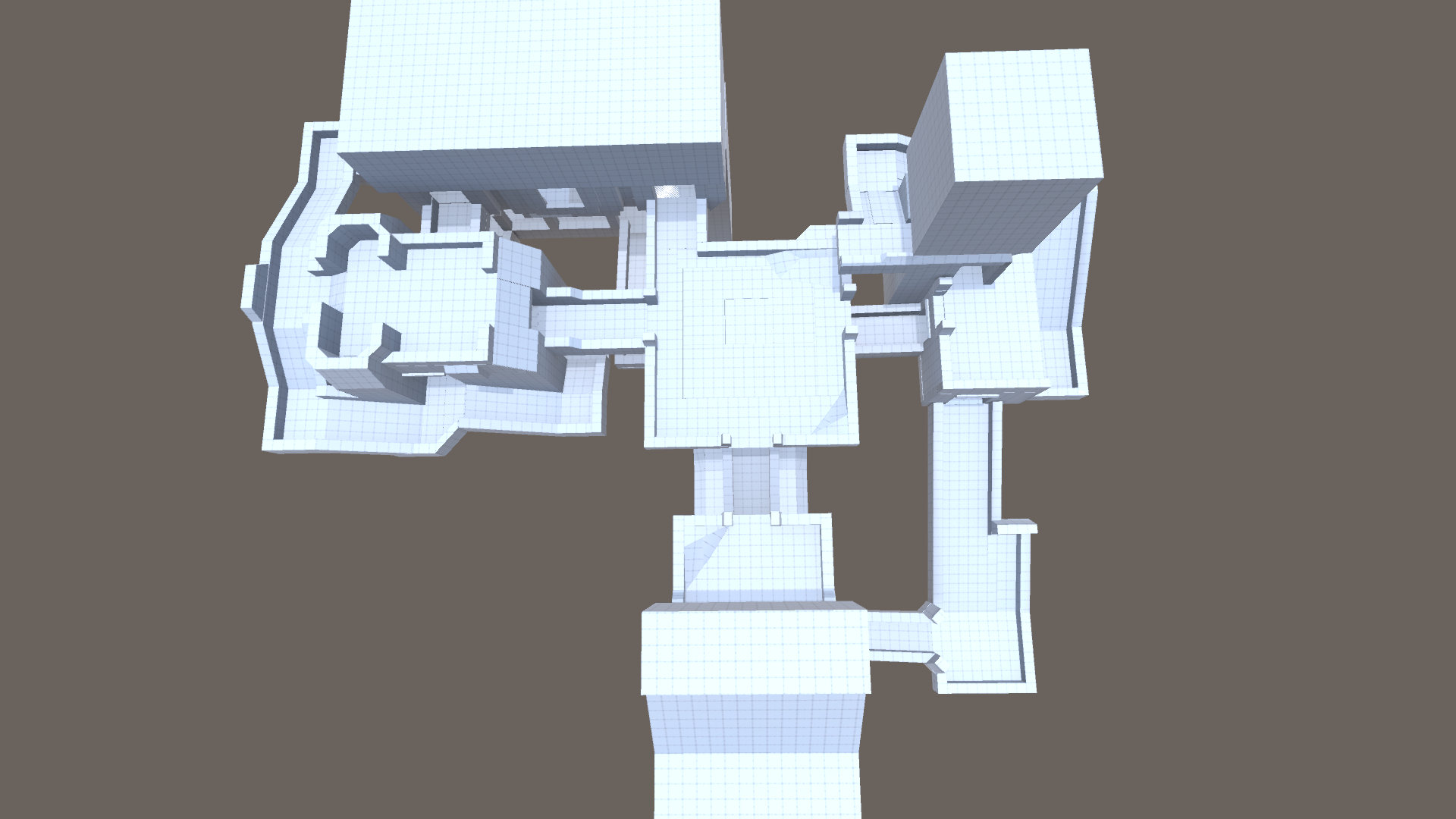 Blaze: "There were probably a good amount of discussions around what maps we wanted to remake in the future and if I had to guess, I’d say that the inaccuracies sort of pushed me to say that I’ll do it when the topic came up. I knew that we needed a bridge-work style map in our line-up and I felt confident that my knowledge of Lockout and each official iteration afterward would allow me to truly nail a successor to the map without losing anything that really made it feel like a fan favorite." 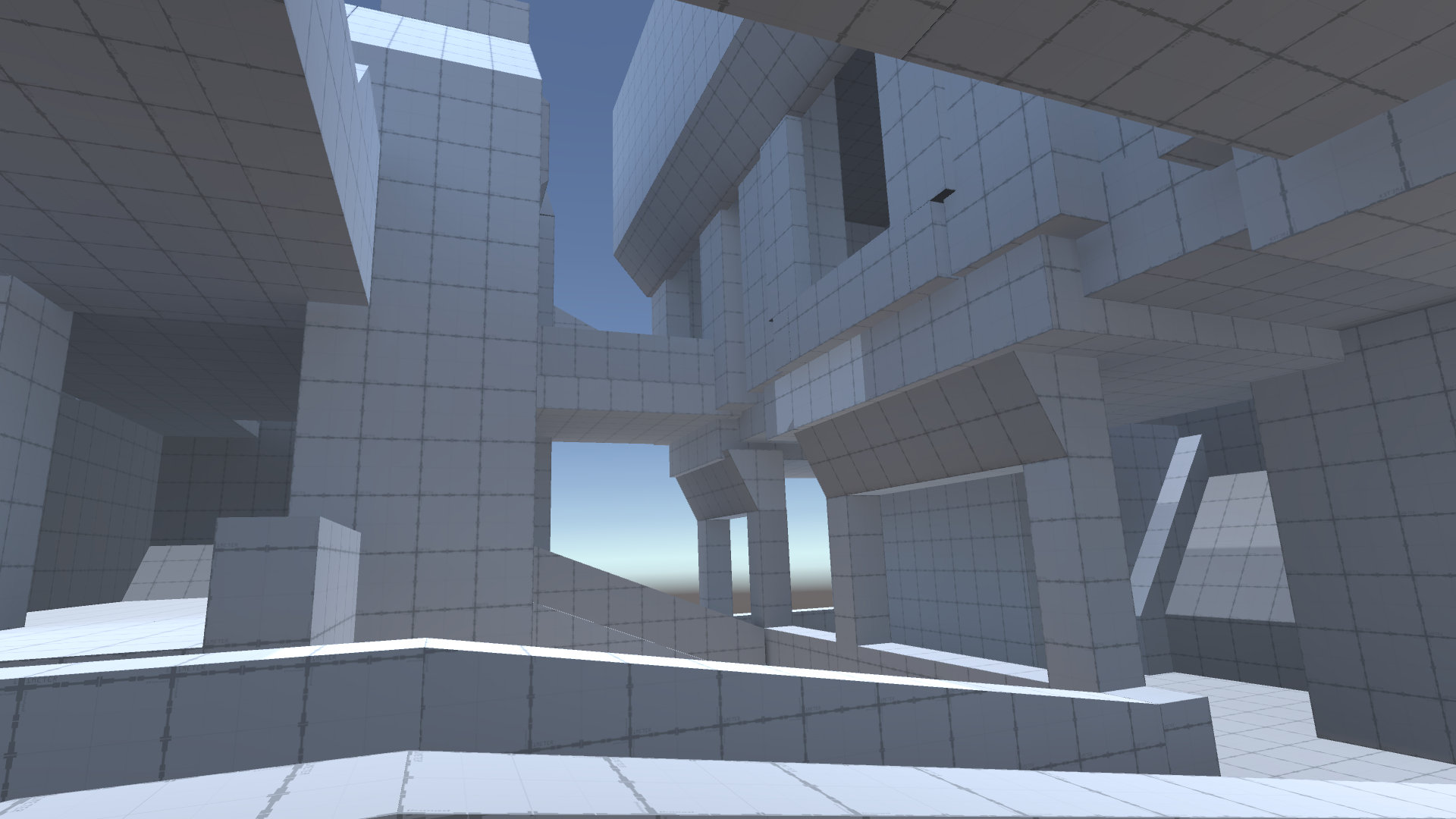 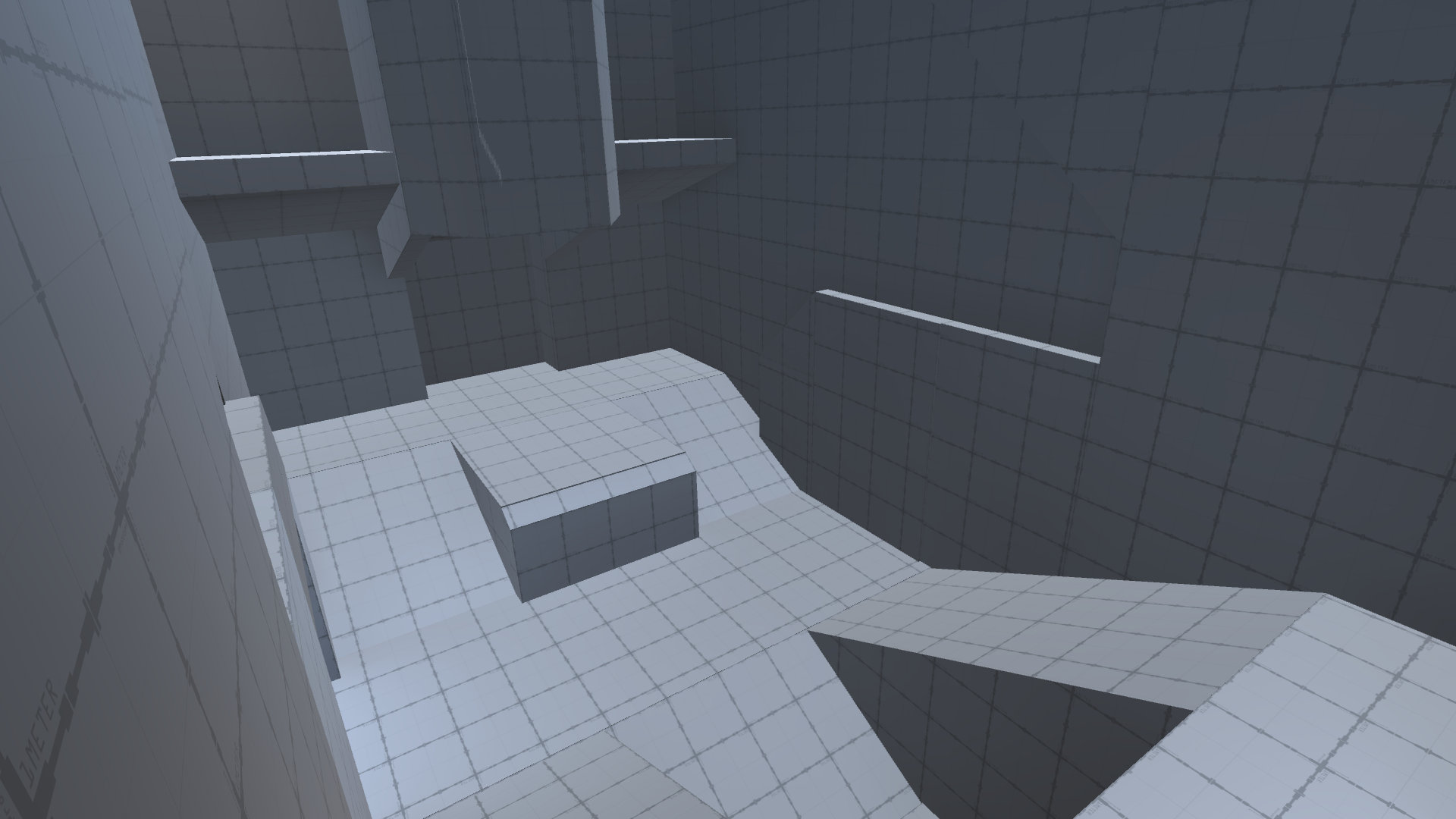 So you like to stay true to the originals, I like it. Did you make any alterations to the original design of the map that might affect the flow or gameplay?

Blaze: "I started with the mindset of a 1:1 remake of Lockout and then looked at Halo’s future iterations ‘Blackout’ and ‘Lockdown’ to see what innovations stood out and could be replicated without comprising the original; as well as adding some small minor quality of life improvements of my own. There are a lot of subtle elements that I took from each but I will list a few things that I felt each did well. Blackout improved upon the symmetry and consistency between paths and doorways across the board, I wanted to carry that over for sure. It also defined some otherwise straightforward areas like the shotgun hall to provide slightly more interesting and fair engagements when pushing out from there. It also had some cool jumps that I wanted to embrace. 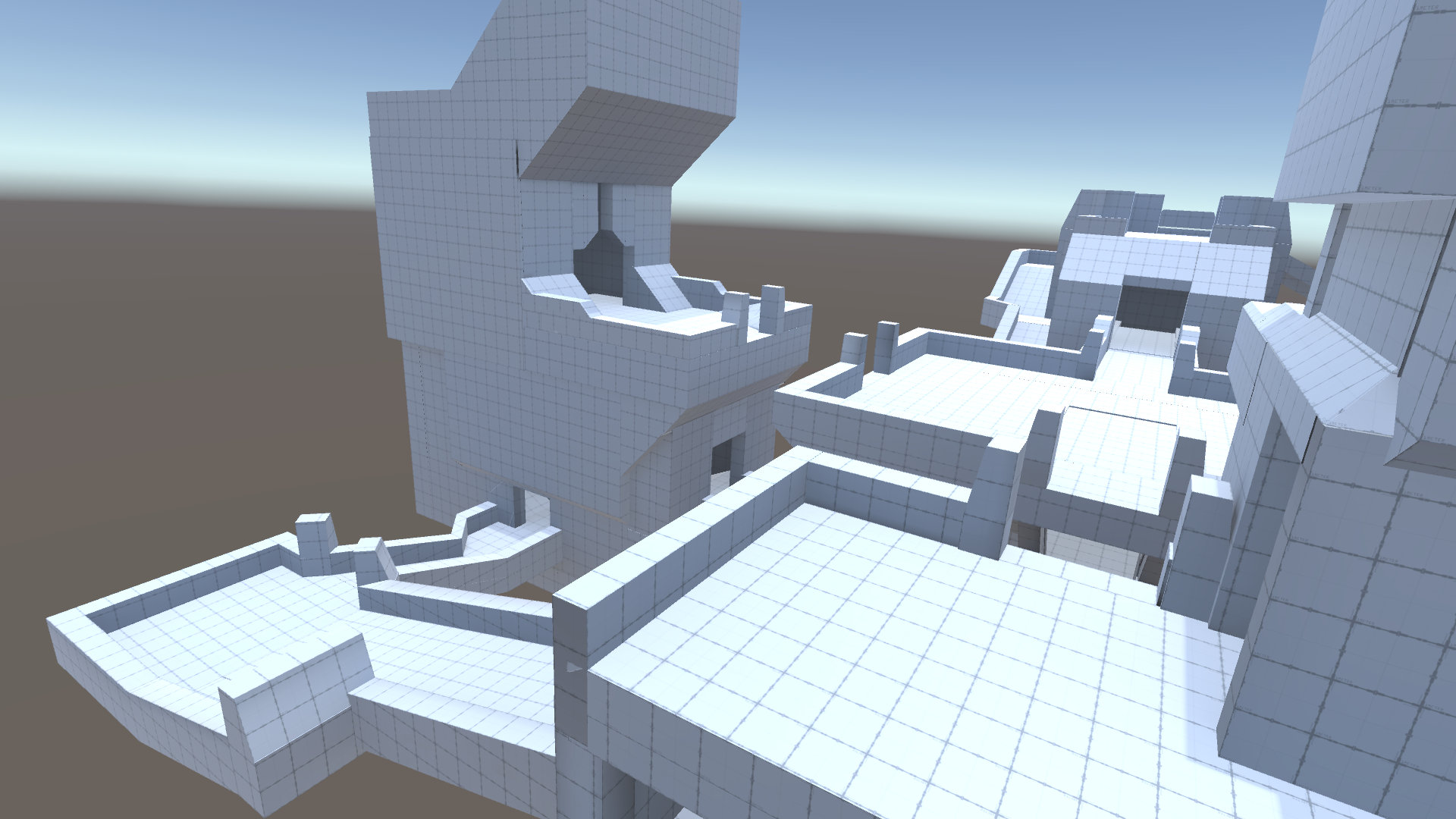 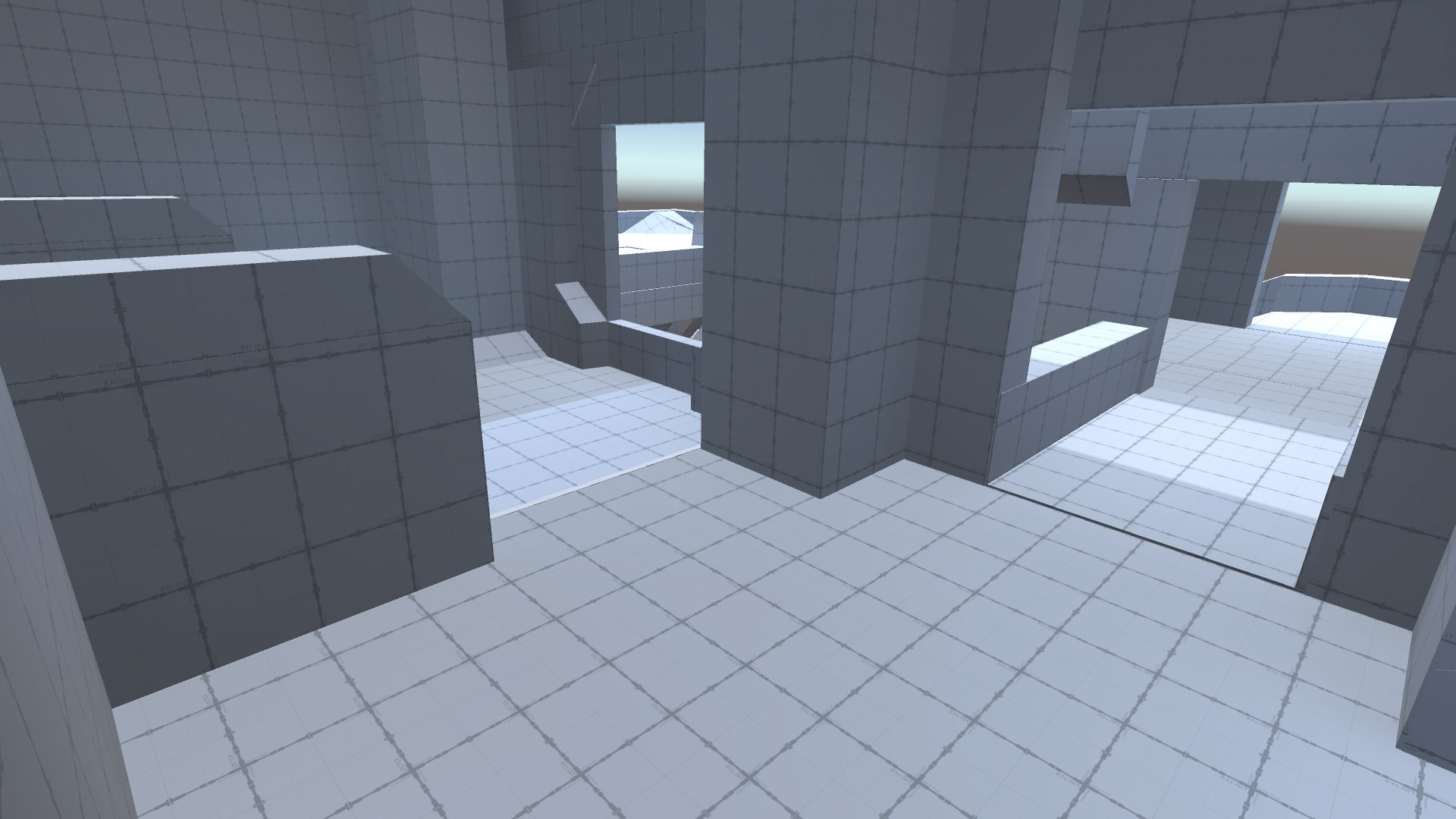 Blaze: "Lockdown added a larger dance floor to the punishing elbow of the map, in addition to the slightly less intimidating route up to sniper tower, I like that this gave the player a clear choice when pushing up to the cover at the top of that area. As soon as you gain the cover from sniper tower, you introduce yourself to a new line of sight from the doorway outside of BR2. Another thing is the snow banks that allow you to move up to the railing in top middle platform without the need to jump. I love that this allows you to move out of one of the most dangerous places on the map without having to perform multiple jumps at the same time; suspending yourself in the air and making yourself more vulnerable." 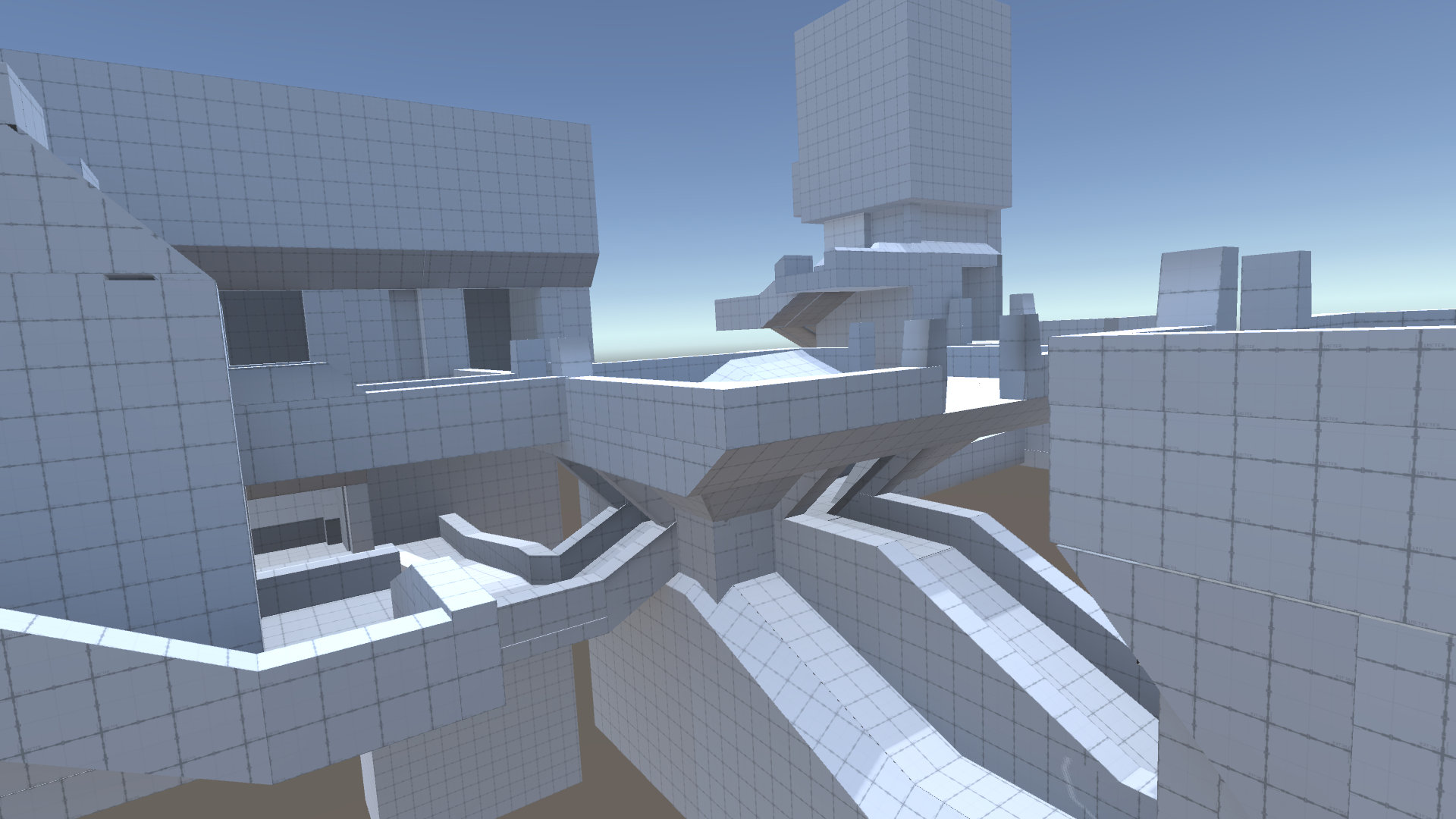 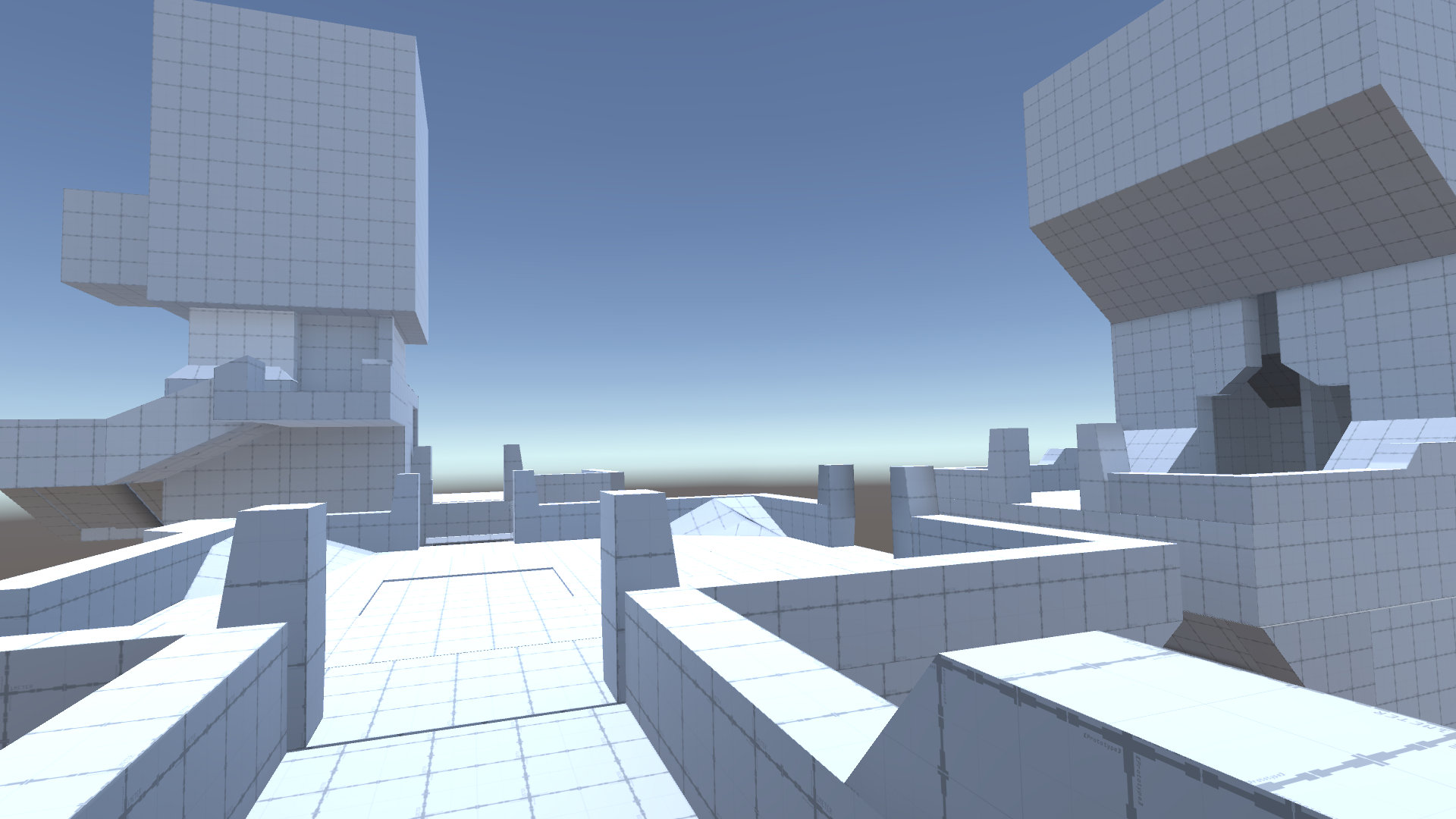 Blaze: "There are a handful more but everything started with the original and was not changed unless I felt that it could be improved upon. I was overly meticulous and made sure to maintain every dimple or notch that provided a jump, every line of sight; up to the areas in the walkways that allow you to see through to another section of the map, scale and all."

Blaze: "I think I mostly covered this above. For a loose recap... Is it going to improve the experience? If it does, will it take away from another aspect? Also, does that justify altering something people have already become familiar with? These things should always be considered whether it is designing maps, games in general or almost anything, in my opinion."

If you could go back with more time, are there any other maps you’d want to recreate for Installation 01?

Blaze: "I did a few other remakes, oddly enough but just to pass the time and nowhere near as meticulous as this one. I did Damnation from memory and messed around building some art assets that I threw together for a Wizard remake, both of which I’ve recently posted pictures of. They aren’t planned for the scope of this project but if everything else the team is working on ends up getting finished up, or the priorities shift, they are free game. As for new ones, I think I’ll have to pass. While I did enjoy being completely anal and banging my head against a wall making Burnout as perfect as I could, I probably should leave it up to members of the team that would have more fun and just stick to doing originals unless someone needs me too. Haha. No specific maps jump to mind at the moment. Really though, I’m sure I’ll do another remake for some reason in the future. I just have fun building in general and I feel that one of my biggest strengths is innovating and building off of other people's ideas. So, who knows." 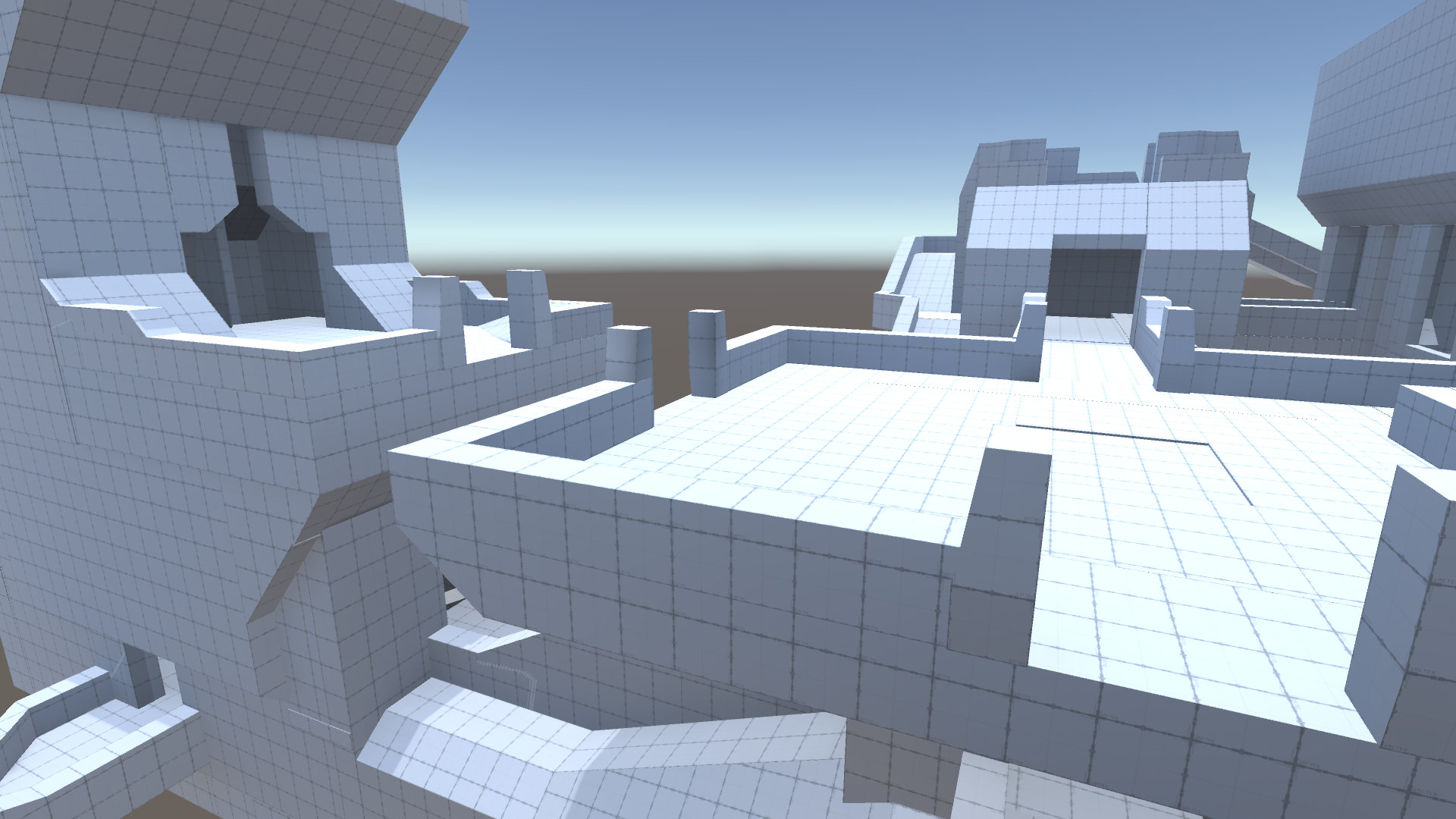 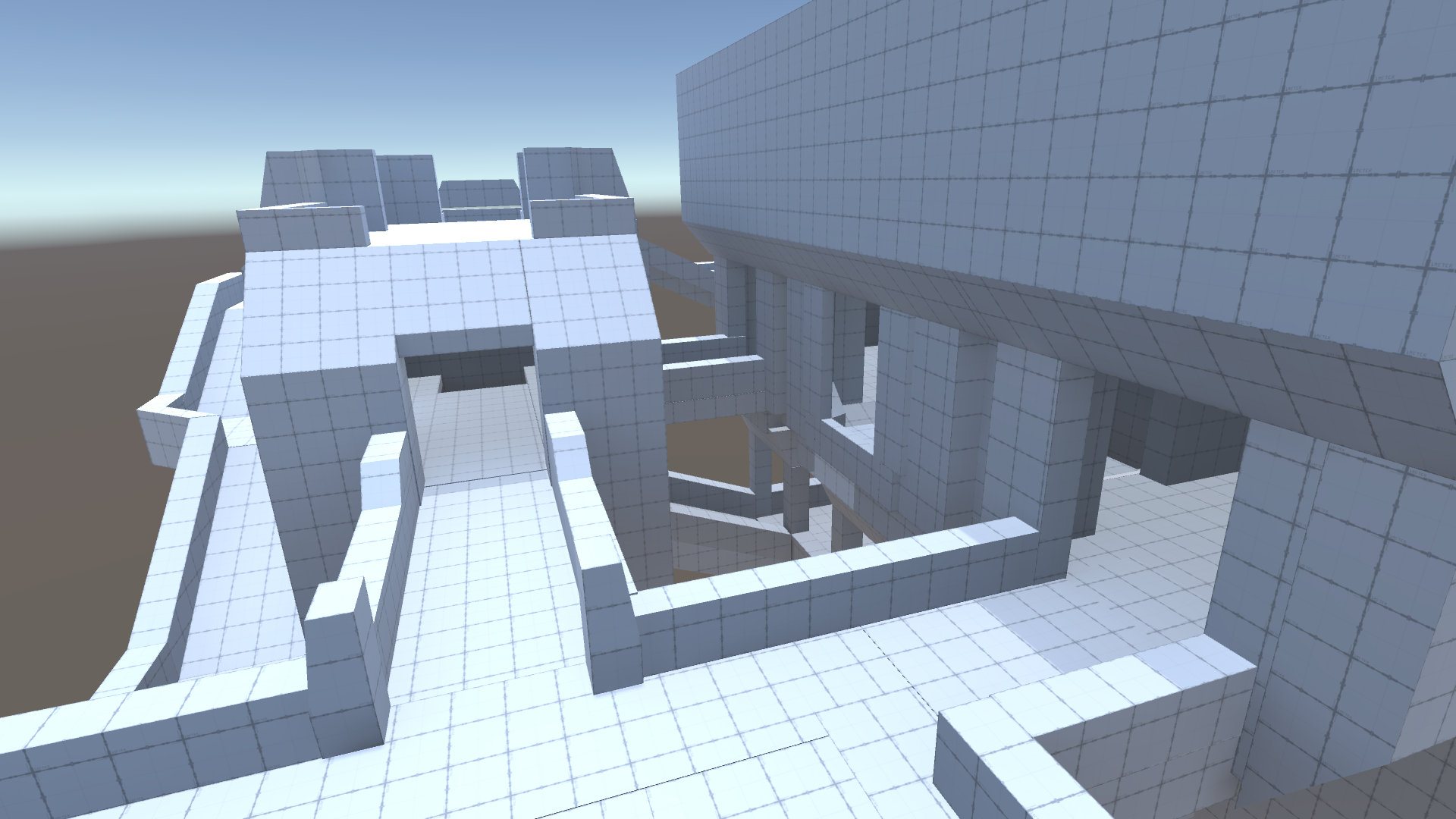 We appreciate you taking a break from work to share with us your vision and map design philosophies, Blaze. If you are interested and want to see more blockouts done by Blaze, check out these ones below:

Another old Blockout that never got used for anything official. I was curious what Halo CE's Wizard would look like with Halo 3's Epitaph architecture.

I only built the playable areas and included some façade bridges and pillars on the outside but no cielings. #Blocktober pic.twitter.com/KvMAE0Exc1

When I was initially learning Unity a few years back, I blocked out an iterative remake of Halo CE's Damnation from memory. It was never used for anything official, so I thought I'd share it for #Blocktober pic.twitter.com/CBMCRCTrlX 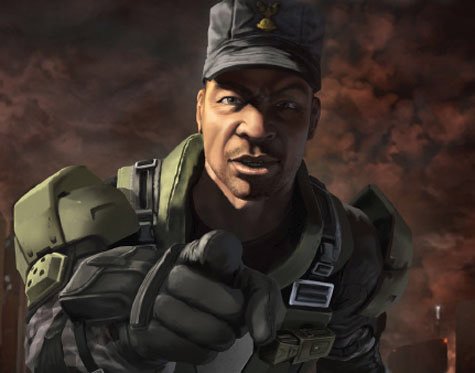 Stand up, soldier. We want you to join our team and drop feet first into Bean’s Project Management hell. We’re looking for talent just like you to finish up this game and deliver straight to Cortana’s doorstep. Think you’re fit for the job? Good. Join today. 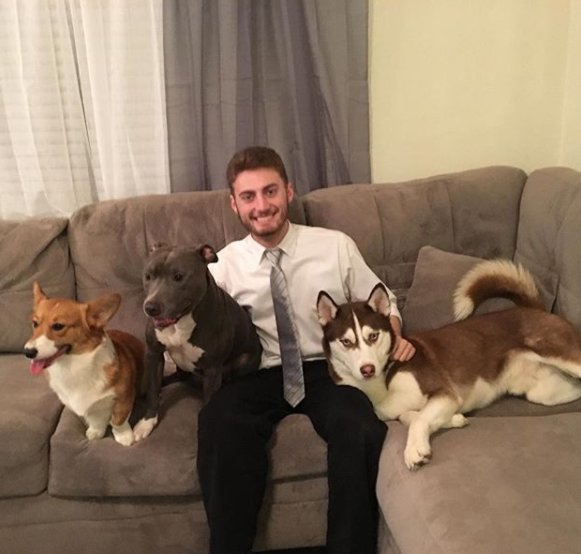 Ah Bean, the glue of groups everywhere around the world. As he holds our team together, he holds his pack of doggo’s together. We’re not sure what tricks he has taught his pack, but we’re certain we do not want to make him mad. I bet that would not end well for any of us.

Thanks for clocking off of work to read this update. We hope you enjoyed it as much as we enjoyed writing it for you. Sev will be taking over for the next two updates as I will be following in Bean’s footsteps and sailing the seven seas for a while. Tune in soon™

4
Hallo_guys
Ah yes, the best Map from Halo 2!
3
Onyx915
I genuinely wish I had any skillset that would be useful for the dev team. Good luck. ^(Taking over the world one game at a time is a slow process...)
2
wildlough62
Do you have any renders where the entire map is just textured with beans? I feel like it would really improve the flow on the map...
2
facundo_vasco
It reminds me of the [half life crate edition mod](https://www.moddb.com/mods/half-life-crate-edition), but with bean's face.