Did ya miss me? No? Oh... well this is a more awkward return than I had anticipated to be honest with you. I don’t really know what I was expecting though. Annnnnyyyywayss I hope you’ve been good even without your doots to keep you going, and for all of our Americans out there, we hope you had a fantastic Independence Day! I figured to make things a little easier for all I’d dust off the ol’ trumpet to give it a go once more... with feeling.

You know what's an even more important holiday than Independence Day? That's right, it's Beangie Day-- The day in which Bean gained his independence from his mother's womb. It comes to us every year on the 7th day of the 7th month. I think a celebration is in order. But first, we must make it through our irregularly scheduled bi-weekly update.

This week I’ll be going over some concepts, a form of communications, and something extra special to brighten everyone’s day. As per usual with me, let’s just get right into the content!

Some of you may have already seen teases of our Lockout/Blackout remake aptly code named ‘Burnout’ but with most of our levels we want something there to make the map feel more alive amongst all the dead Spartans, and Elites. Oddly enough to achieve this we made something that cannot feel pain, sadness, or anything really. To clarify, I’m not talking about TheFeelTrain here, though I hear there are small Trains hidden around the maps you can collect. I’m talking about our new little robot we’re calling the ‘Lava Miner’ Sentinel. 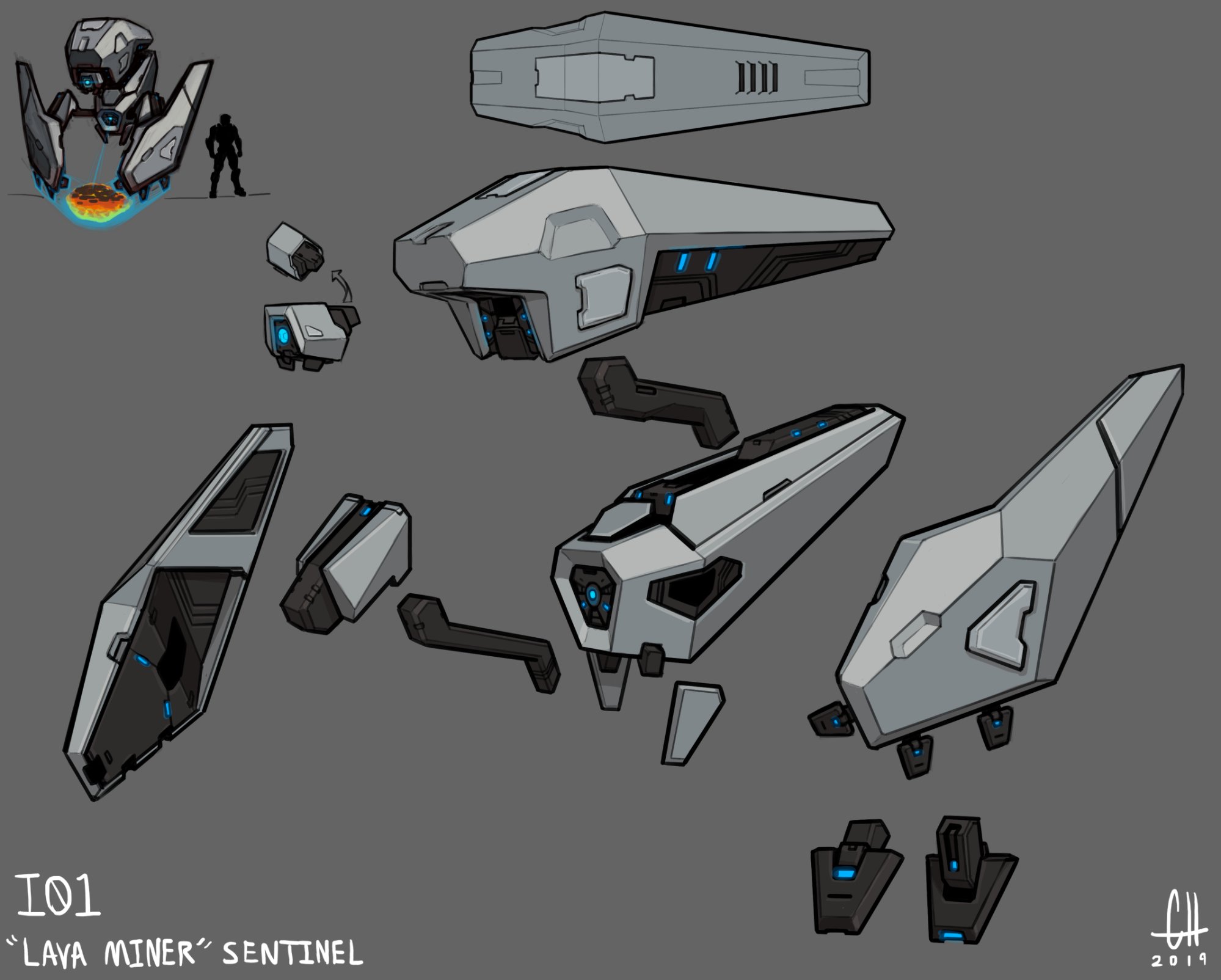 What a boring name for something so cool, right? I think it deserves a far better name. My vote goes to Ralph. I don’t know why, but I think it feels just right for him. But I want to hear what your names for it would be! The name with the most votes will be it’s totally-official-but-not-really name, and the winner will be announced the next time you see Ralph all prettied up, and modeled.

Here’s a bonus screenshot with some cool little information about each part of him. 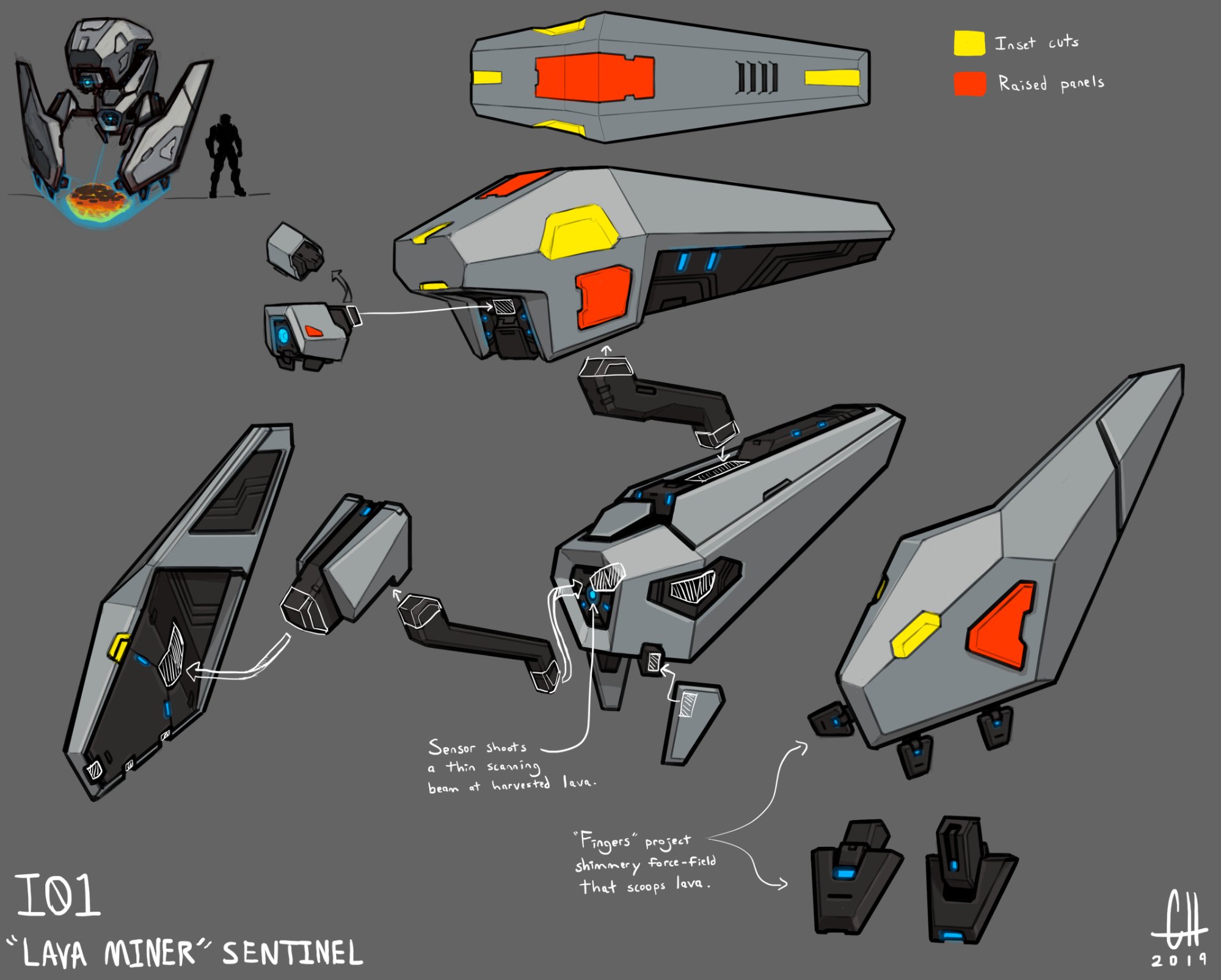 But that’s enough of Ralph for now, we’ll get back to him later when he’s got a new body, paint job, and even name!

In case you don’t follow us on Twitter, we’re attending Halo Outpost Discoveryin Philadelphia, and will be co-hosting a panel with SPV3, and Project Contingency about fan games, mods, and expanding the Halo gaming experience on Saturday 7/20/19. So if you’re attending come by and say hi! 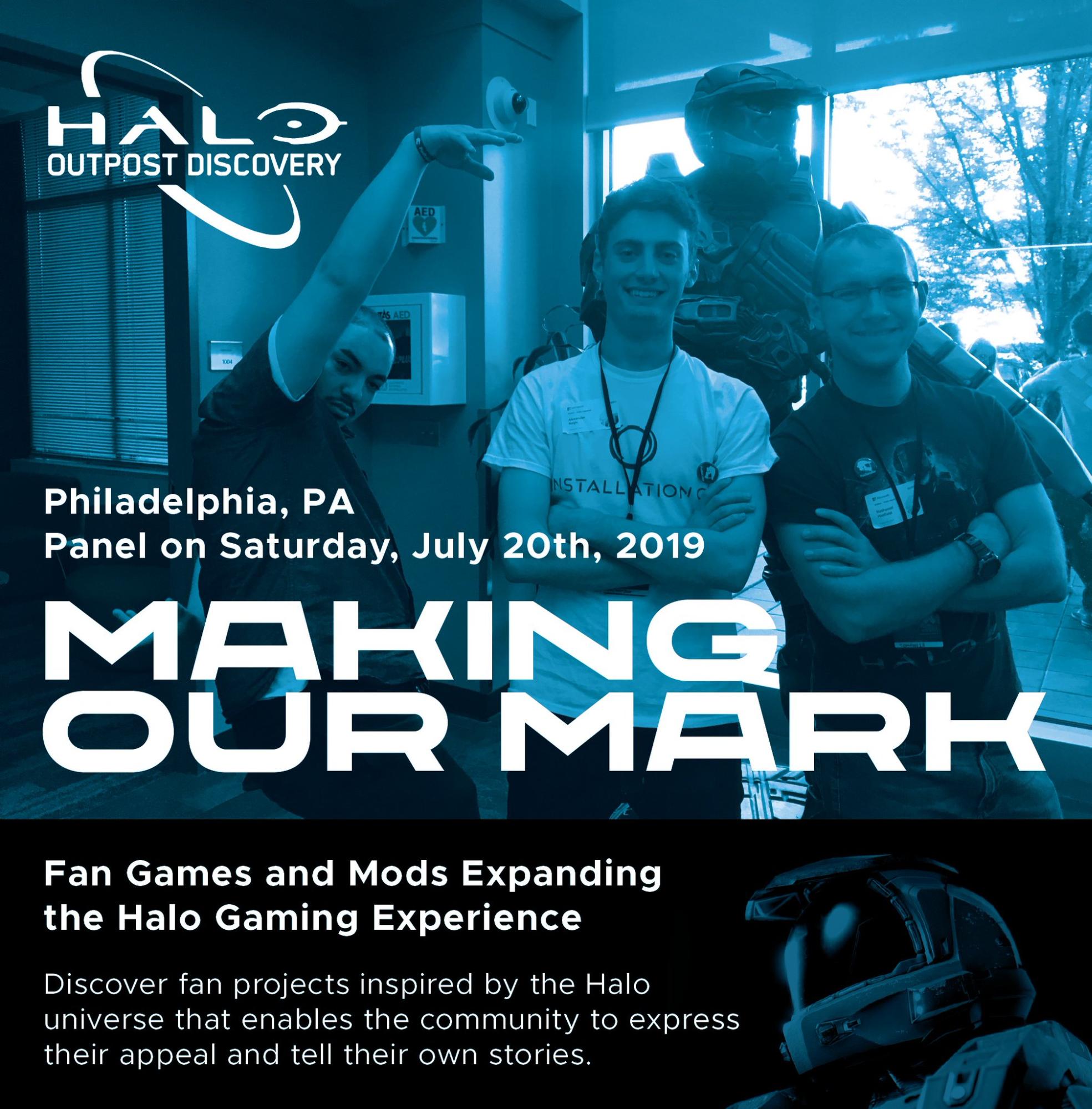 If you haven't heard, video actually killed the radio star. But that won't stop us from putting a radio into our video game. 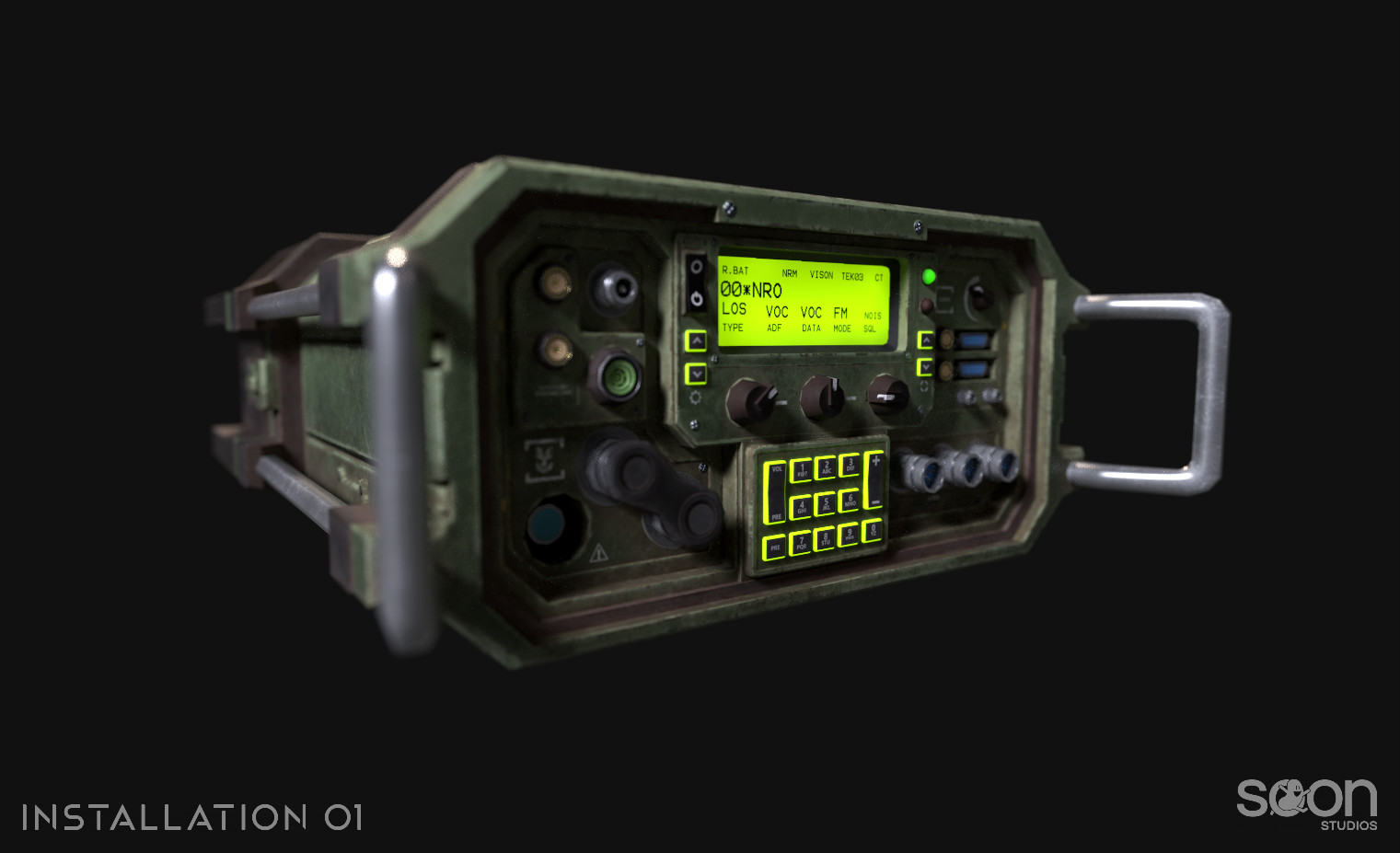 This isn't any old radio, this is an advanced military radio from the year 2552. Which of course means it has the exact same audio quality as the ones from 1952. It's not like the UNSC could use laser beams or something, that would require a higher military budget and we're already burning through a couple trillion dollars per month fighting off the Covenant.

Even though audio quality is unchanged, our radio still offers a wide range of modern features. We built it to be extra lightweight at only 350 pounds (about 160 kilograms for you dirty commies out there) and it has big metal handles so you can easily load it onto warthogs or pelicans with the help of three of your closest squadmates. It also has state-of-the-art analog buttons and dials to help you tune your frequencies with precision. Touch-screens are overrated, and unreliable unlike these sturdy metal dials.

I don’t have the time to sing you a song, but next time I’ll try not to sing out of key. To keep it short, and simple, we need YOU, yes… YOU. We’re currently hiring for some open positions here on the team, and if you fit within any of the positions listed on the website, please apply to join!

To apply click on the button below, and find the position you best fit in!

Got a better idea than the listed positions? Send me a message, and we’ll take a look at it!

I Scream, You Scream, We All Scream for Livestreams

We hadn't done any livestreams in quite some time, so we decided to stream what it looks like when we attempt to work on the game. It looks about how one would expect fan game development to look like. But if you missed it, there is even some "gameplay" hidden inside somewhere, possibly around the 2 hour and 25 minute mark.

Not many people know this, but it is actually illegal to blame Bean on his birthday. Not just in the US, but in every country, even North Korea. So instead I’ll give you some insight into what he’s been up to! Now, most of you don’t know this somehow, but I’m totally gonna dox him. 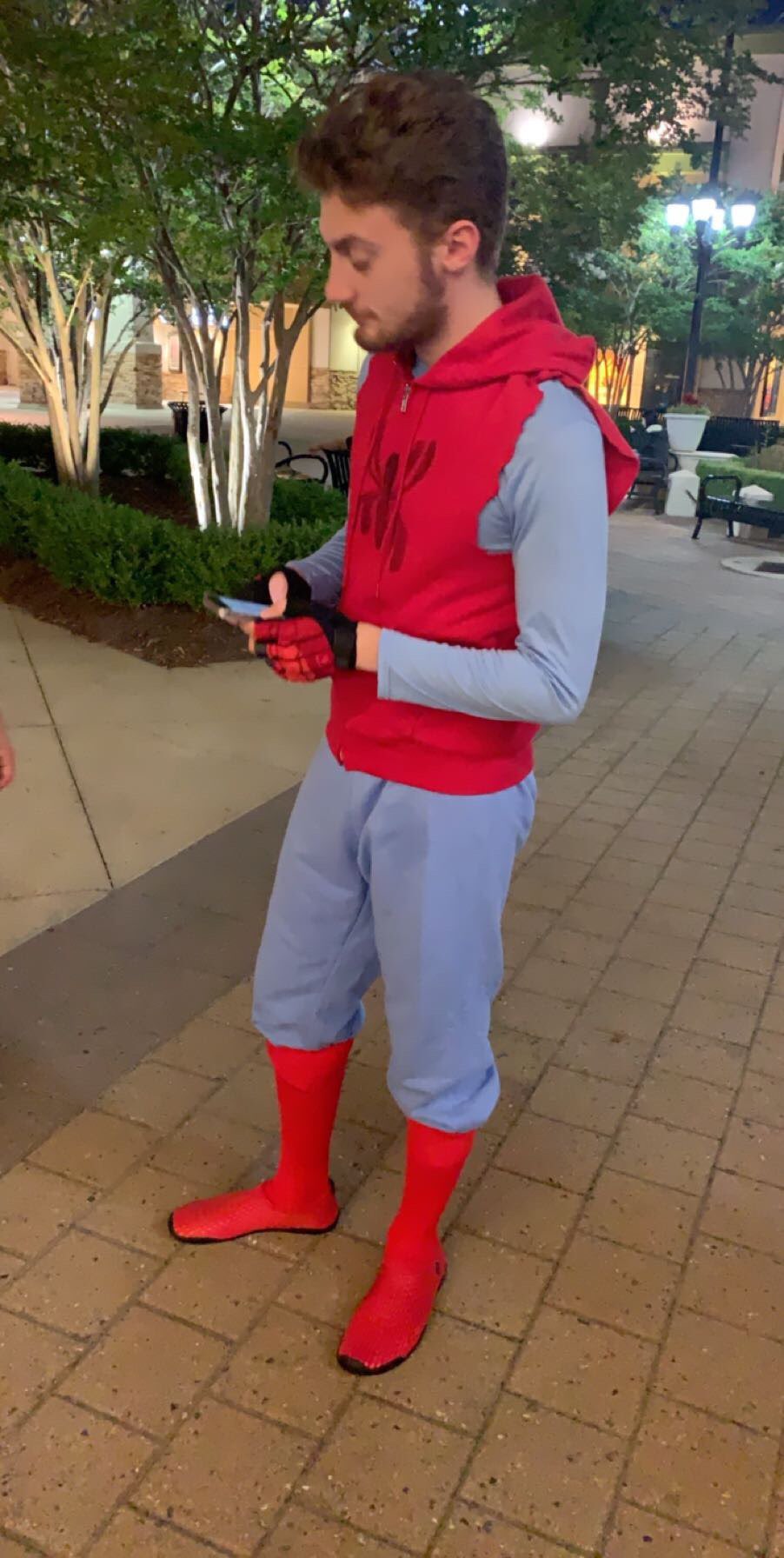 Bean is actually Spider-Man. It happened at some point during a cruise a couple months ago, you may remember that. We’ve been trying to work through it as a team to keep everything going with him constantly out fighting crime. At least he occasionally hops onto Discord with his phone, and makes sure everyone is working on the game to get it out to you all. So if you could, send him some love, and thank him for all he has done for this project and continues to do.

That does it for this week sadly, I’ll be behind the scenes making more of our Programmers come on, and talk to you all about the technical side of game development like our menus, gametypes, and more. So look forward to that! But I wanted to clear the air a bit here, I’m sorry I haven’t been around much for you all, I’ve gotten busy making Call of Duty so I wont see you all again for awhile. But remember, this doesn’t mean I don’t love you! So don’t be sad, a new face will be chatting with you all in a couple of weeks in his debut doot.

Until next time friends,

10
Armadss
Thank you for blessing us with this wonderful image
6
wifiwolf23
Ahh, no Beangie Day 4k wallpaper?
4
Onyx915
Will there *really* be collectible trains as an analog for the skulls?
4
Choo Choothefeeltrain
https://static.i01.co/blog/TheFeelTrain.webm
7
Waffles_Of_AEruj
I love Ralph. Perfect name for him R-4LF
5
ToaDrakua
"Behold, the Gatherer Sentinel in its natural habitat. A humble yet dedicated worker, this creature is but one in a million different pieces in the intricate machine that is the Forerunners' legacy. Right now, he is harvesting key minerals from the magma that are necessary for the production of the complex circuitry that run every machine produced by the forge it inhabits. Oh! But was is this? A curious Spartan approaches. The gatherer pays the Spartan no mind, as it more concerned with the delicate task at hand. The Spartan crouches, then un-crouches, a common greeting amongst its kind. As a Reclaimer, the Spartan is one of the few species able to interact successfully with the majority of the machines in the Forerunner Ecumene. This Spartan, however, is unsuccessful in its attempt, as the Gatherer chooses simply to ignore him. Undeterred, the Spartan tries again, this time performing his people's greeting a little more vigorously. The Gatherer merely spares a glance, the Spartan's still left un-requited. Now angry, the Spartan shoots the sentinel with his BR-55, a highly favored rifle amongst its tribe. Still no response. The Spartan is clearly frustrated. It pulls its rocket launcher, takes aim, and... the Gatherer is no more, destroyed by a petulant Spartan with an itchy trigger finger. I'm David Attenborough, and this has been, "The Lives of The Sentinels."